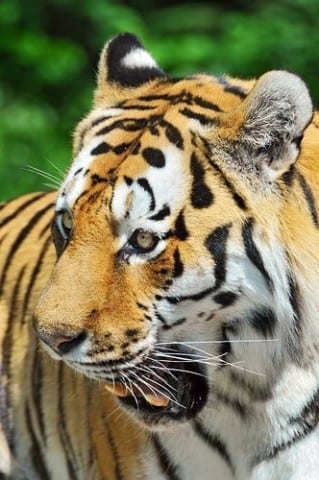 All zoos don’t necessarily treat their animals poorly, and there are a few simple solutions that could help easily increase quality of life for animals in captivity. While it is ideal that one day there will no longer be animals in captivity, that is somewhat of a lofty aspiration. It is almost impossible to go back and repair all the damage that humans have done to animal habitats, so obviously there will need to be a solution to where the animals on our planet are going to live. This is why zoos, if following government regulations and keeping the animals best interest in mind, can indeed be a positive way to protect animals. Many people argue that zoos are the only thing that keep certain kinds of animals from extinction. And yes, on the surface, that point is true. However if you really look into that assertion, it says that it keeps animals from extinction, rather than helping them to thrive and to get off the endangered species list. It is one thing to make sure that an animal doesn’t go extinct, but it is an entirely different issue to make sure that those animals will one day be able to be released back into the wild to help further their population. If zoos around the worlds’ main focus was to make sure that animals didn’t go extinct, then we wouldn’t have the same kind of zoos that we have today. Rather our zoos would instruct people on what they can do to help, or how our day to day activities are harming these animals habitats. Rather we are presented with a distorted image of how animals live, and in turn this makes us neglect the need for conservation.

Another aspect of zoos that isn’t healthy for animals is animals social lives. Animals in zoos who would usually, in the wild, be roaming around with other animals are often times placed in small enclosures by themselves with no other animals to interact with. And animals that would much rather prefer to be alone and to not have to come into contact with other animals are often times forced to live in enclosures with other animals, that in the wild, they would never cross paths with. This social atmosphere of zoos is another way that damages the mental health of animals. These animals living in zoos are programmed on which animals to stay clear from and which ones to interact with, and when humans intervene with this system, it damages the animals mental health.

Zoos present people in parks with unreasonable depictions of how animals act in the wild. A good zoo would be one that helps instruct the people visiting on how the animal acts in the wild, and shows them some of their natural behaviors. Rather, zoos are causing animals to be “performers” that are bribed with treats to do whatever the zookeeper wants them to do. This act completely undermines the movement of conservation, since it doesn’t give people the accurate reasons on why we need to protect animal habitats. By enticing animals to do certain tricks for treats, the animals are completely stripped of their wild instincts that make them who they are. This makes returning animals to the wild impossible because they would no longer be able to protect themselves the way they would be able to before. This only further adds to mental health complications that spark from the conflict of their instinctual behaviors and those that they learn in a zoo.

Carter,
I see what you mean and I totally agree with you that zoos do more harm than good to the animals they keep. The small spaces and strange new “order” that the zoo animals live with are in no way conductive to their health or well being. One way in which they are beneficial to a species, however, is that they give everyone the opportunity to see these animals in real life as opposed to just in books and photos. The experience of seeing an animal in real life that naturally lives across the world from you is actually conductive to conservation in its own way. If you never see an animal with your own eyes and learn about it, you aren’t likely to care about it. It’s like the difference between hearing about starving kids in Africa and seeing them. I agree that zoos don’t do a good enough job educating individuals on the necessity of conservation and aren’t places in which animals can thrive, but what better to move someone for a cause than to see what they are working for- the animals they could only see in their local zoo.

Carter,
You presented some very interesting points, and I agree with you that it is difficult to go back to before zoos due to our destruction of the environment including animal habitats. But I also agree that there should be a better solution than zoos. Here is an article that you might find interesting: http://www.nytimes.com/2004/03/31/arts/at-the-zoo-improving-the-environment-for-creatures-of-two-and-four-legs.html