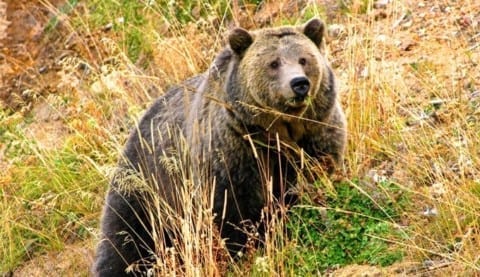 Encounters between grizzlies and humans in Yellowstone National Park has led to the domestication of bears throughout the park’s history. Increased efforts to create awareness among park visitors would solve many of these problems and enhance the experience of those visitors.

The population of grizzlies and the spread of human development has led to many of the problems that the grizzlies face. Since 1975 grizzly bears have been on the endangered species list. Being on this list usually helps a species recover. While it did help the grizzly bears, they have been on the list for such a long time that the grizzlies have actually started to overpopulate in the greater Yellowstone area. Starting with a population of around 136 grizzlies in the park in 1975, that number has risen to 717 grizzlies in the Yellowstone Park area in 2015. The park has had to euthanize bears due to negative human interactions, the bears have still maintained a rather extensive population in the park. If grizzly bears continue to receive this special treatment, the population could possibly grow larger. An increase in the grizzly population could lead to changes. There has already been a change in the ecosystem because it has allowed bears and wolves to help each other. The wolves will eat what the bears don’t eat, and the bears will eat what the wolves don’t.

The issue of domestication has also affected the bears, which causes them to relocate because of human error. Human interactions, such as people getting too close to the bears, people feeding the bears, people baiting bears with food to get closer for pictures, and people leaving trash behind, all have an effect on bears. Soon after the bears were put on the endangered species list, YNP had to euthanize a whole generation of bears because they were all domesticated and couldn’t hunt on their own. If visitors in the park continue to feed the bears and treat them as if they are pets, YNP will have to euthanize another generation of bears. It is very important to make the people more aware of the effects they have on bears by making informational brochures about the grizzly bear.

The park has put up signs and handed out informational pamphlets warning people about the dangers and risks, but these signs and pamphlets are about all the animals in general. Instead, the park should release individual pamphlets about certain animals because each animal has different regulations and cautionary guidelines that need to be followed. Also we could take surveys and see just how well people are actually aware of the dangers and risks. Maybe, if people understood how to respect each animal, then there might not be as many fatal animal and human interactions. This would save people, but it would also save bears.

Some people feel as if they don’t need to adhere to park policies because it’s their vacation and they spent money to be there. Others feel as if they already know everything about the animals, and they follow their own rules. People from outside of the greater Yellowstone region don’t really know how to behave around such wildlife. Besides, the pamphlets are provided at only certain locations in the park. There really isn’t a way for people from out of state to know certain things that people from Montana, Wyoming, and Idaho have picked up through living around large wild animals. The people from outside the greater Yellowstone region aren’t just the only ones who are misbehaving around grizzlies. People can feel as if they know how to act around these animals, and that makes them feel like they don’t need to follow the rules that the park has put in place for their safety.

If we raise awareness about the grizzly bear and all of it’s problems, the park will be a better place for everything that lives near and around the park. The park could achieve this goal by educating the people inside of the park more. The main problem as we stated earlier is a lack of awareness which could be solved by putting signs up and having information packets for every animal in the park. If the park takes these actions it will be a better place for everyone in and around the park.

Written By: Braiden, Kevin, and Talyn