Yellowstone’s Wolves: Why Predators are Crucial to the Ecosystem

Home Yellowstone’s Wolves: Why Predators are Crucial to the Ecosystem 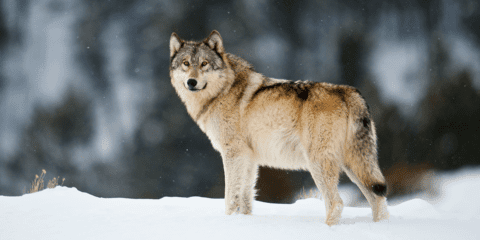 The word “predator” is often associated with negative images, such as a big, bad animal attacking an adorable, tiny animal of prey. We may think of massive sharks, lions, tigers, or bears, who are usually described as something to fear and even get rid of rather than a creature with immense importance to the ecosystem who should be appreciated and protected. If you don’t believe that, this article will convince you of their positive impact through the research done on the importance of predators through Yellowstone National Park’s wolf population.

In the early 20th century, government predator control programs almost eliminated the gray wolves from the consecutive United States because they were feared to be a risk to both humans and wildlife. People did not realize that wolves are the top of a delicate food web which needs this top predator to stay in balance.

With the wolves gone from Yellowstone, the elk population doubled because their main predator was no longer present. The abundance of elk overgrazed the whole park, which upset the natural balance of the ecosystem. Small grass animals such as mice and rabbits had no grass to hide in, so their populations dramatically decreased. Grizzly bears’ berries that are necessary for storing up for hibernation were eaten by the elk. When wolves were around, elk wouldn’t spend too much time at the river because they were vulnerable there. However, without the wolves, the elk spent a lot of time on the riverbanks, and their hooves eroded the river, clouding up marine animals’ homes with soil. Without clean water, beavers couldn’t build their dams to live in; without the beavers’ dams, fish, otters, and amphibians also suffered.

When the wolves were reintroduced in 1995, the effects were shocking. Wolves brought elk numbers down, creating a more robust population through survival of the fittest. The elk carcases give scavengers, such as coyotes and eagles, food to eat. Grizzly bears’ population increased, and more berries are around since there are less elk. The riverbank plants are restored, which means stronger riverbanks and less erosion, and along with less elk constantly in the river, the water is cleaner and clearer.  Beavers can reconstruct their dams, which then creates new habitats for marine animals such as otters and fish. These effects are known as a trophic cascade.

This trophic cascade also affects humans. More visitors come to Yellowstone to see the wolves, which pumps millions of dollars into the local economy, creating new jobs and a better economy. Wolves are beneficial for everyone and everything in Yellowstone. Predators are not to be feared or hunted, but to be protected and appreciated. Yellowstone’s wolves prove the positive impacts predators have on all ecosystems.

Beth, I was really happy to see your post. Lots of people are concerned about Bambi being dinner then how the whole ecosystem benefits. I went on search for an opposing view, and PETA did not let me down. https://www.peta.org/about-peta/why-peta/predator-reintroduction-programs/ is where they make a few good points. It’s stressful for animals to be captured, contained, and then let loose in an unfamiliar environment. They make a few not so great points about how prey animals are stressed because they are being hunted and leave it there, not exploring the greater benefit. If you ever run out of articles to write, you can do a sort of response to PETA. It’d be cool to see.