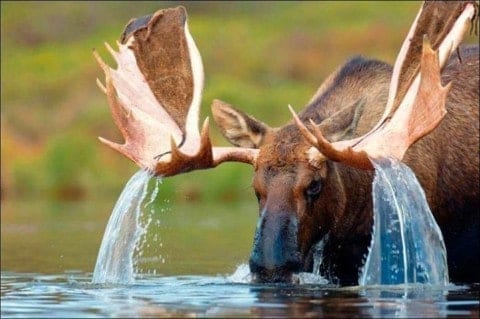 Moose need to once again obtain protection in Yellowstone National Park and the surrounding areas because their population is falling to a critical level. Today there are less than 200 Moose in Yellowstone, and these numbers have been dropping rapidly since the 1990s. Current protections  include strict hunting regulations and fewer moose tags issued per year. In 2014, in an attempt to raise moose populations, the region north of Yellowstone in Montana was only issued two tags for moose.

In the late 1800s, moose were scarce due to predators, hunting, and fires until the populations began to grow again in the early 1900s when programs were issued to combat these problems. The population grew to about 1,000 in the 1970s, but the numbers once again dropped by the 90s. A population count in 1996 showed less than 200 moose currently in the park. This means that the northern range population declined by 75% since the 80s.

There are many factors that tie into the population decline of the moose, like hunters, predators, fires, ticks, and global warming. People are causing global warming, which in turn, increases the tick population because ticks thrive in the warmer climate. The increase in tick population extremely weakens the moose from blood loss. That blood loss makes the moose weak and easily susceptible to predators. These issues all become a huge domino effect.

Montana Fish, Wildlife, and Parks reported that 40,000 – 50,000 ticks were found on one Montana moose during the winter. In the harsh Rocky Mountain cold, the ticks latch onto moose causing them to rub against trees in an attempt to remove them. This removes their warm, winter coats, which protect moose from the cold.

On April 5th, 2017, Brett French, the outdoors editor for the Billings Gazette, said, “Unlike deer, which have the Mule Deer Foundation, and elk, which have the Rocky Mountain Elk Foundation to support habitat conservation projects to benefit the species, I know of no moose foundation in Montana or Wyoming working to help the unique species…” This very knowledgeable journalist has no knowledge of any moose foundations and our own efforts to find an organization online failed. On April 25th, 2017, YNP Ranger Jon Nicholson, who has worked at Yellowstone Park for four years, stated that he also has no knowledge of an organization that is currently acting to benefit moose.

In 2008, moose were listed as threatened on the National Endangered Species Act. People may say that the numbers are not low enough for moose to be put back on the list; however, as we look at the rapid decline in numbers, the depletion of roughly 800 moose in 20 years shows the heavy losses moose are currently facing.

Moose need to obtain protection in the Greater Yellowstone area once again because their population is falling critically low. If moose were once again placed on the threatened species list, of the Endangered Species Act, there would be many new steps introduced to protect them. To do this, we need the support of our state and the attention of our congressmen and senators to bring about the awareness of the current moose condition. We must found an organization like the Rocky Mountain Elk Foundation. To spread awareness. This will allow us to have the funding and capability to start the required programs to help moose. The programs could be spearheaded by the National Park Service, volunteers, and scientists. These programs have greatly helped moose previously, and, if we are able to start them again, the moose population will once again thrive.