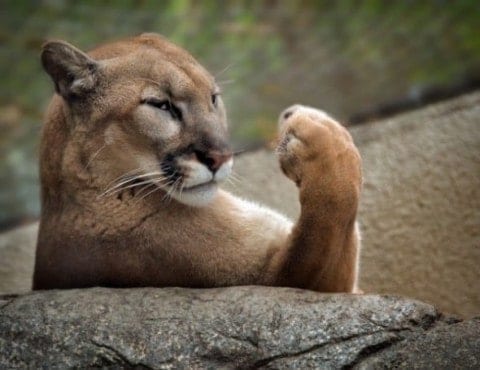 Cougars are an important species inside Yellowstone Park, due to this researchers should shift their focus towards them, to expand our knowledge of this elusive species. We know some information about cougars but they are not often seen by humans. Due to this we are not able to do very much direct research with cougars in the wild.

The predator control movement in the early 1900’s devastated the native population of mountain lions in the Wyoming-Montana area, some hunters coming in with 100 cougar skins at a time to sell. And there were many hunters like this, and as the number of kills grew, obviously, the cougar population fell like a rock. Now after that had stop the population was thinned out so greatly, any research we wanted to do on them was almost impossible. It wasn’t until the past 30 years that we were able to gather better research on them because their population had grown enough.

Inside the park tier numbers are still low, from about 20-25 individuals, but they are quietly thriving. So their numbers are still relatively stable. In the absence of the number of cougars the amount of elk increased so much that there was over grazing in the river beds and other places in the park.

This proves the Importance of the mountain lions in Yellowstone Park. The forest ecosystem of the park needs these elusive creatures to keep  balance. The effects of these creatures on the ecosystem around them keeps other populations in check. We need to do more research on these creatures to know more about them. I certainly will, and I encourage the National Park Service to do as well. Currently they have the Yellowstone Cougar Project to research these animals, but I would like to see more results from this project.

Ben, I enjoyed reading this article. I love how you put into perspective how much of an impact mountain lions have on YNP. It shows that any effort we make to try and help their population thrive can go a long way.