Would You Want Your Country To Have Nuclear Weapons or Abolish Them?

Home Would You Want Your Country To Have Nuclear Weapons or Abolish Them? 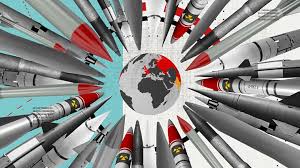 In World War 2 the U.S. bombed Hiroshima and Nagasaki that killed thousands of people and was the world’s first nuclear bomb. The bombings led to an end of World War 2 and made the world a more dangerous place. During World War 2 Albert Einstein wrote a letter to President FDR warning the US that Germany was developing a nuclear device. The letter led to the U.S. nuclear program and bombing Japan. When scientists were testing out nuclear bombs they didn’t expect the radiation to be so bad that it affected nearby towns and an increase to infant mortality and new types of cancers. Since the experiment hurt people the U.S. paid 2 billion dollars as an apology. When the U.S. dropped a bomb on Japan the radiation caused thousands of citizens to die of burns and poisoning. The U.S. tried to hide up what they caused so it wouldn’t look bad on them. After the 2 bombs there was another on its way but Truman felt bad about the thousands of kids that were killed. So he made the decision to transfer the power of use of nuclear weapons to the presidency. There’s a controversial topic about either keeping nuclear weapons or abolishing them.

The people that died over the bombings in Japan is very sad because it killed innocent men, children, and women. Not only did the U.S. bomb once but twice which was double the sorrow. Before the bombings in Japan the U.S. did an experiment bombs that affected nearby towns and apologized with money. The lives that were affected will never be the same since expecting mothers never got to see their unborn child. Why did the U.S. continue to bomb Japan when they knew what the outcome was? Having bombs and not having them is not a very easy decision to make. For some people it makes them feel safer but for others they don’t because it kills innocents.

Would you want your country to have nuclear bombs or abolish them?

we had to end it some how

you are making it sound like we were the bad guys in ww2 but do you even know how many american soilders lost their lives fighting for you to be safe no we were being slotered there they shoved gernades down our throuts and beat us and killed us I disagry with you.

dear Hiede i thought it was very interesting how you put the examples of war in the article. it really showed how much we’ve learned as a country to let history repeat it self.I think it will be a great idea to get ride of the bombs because it will stop them from doing it again.

my favorite sentence that you wrote was ¨Not only did the U.S. bomb once but twice which was double the sorrow. this is very important because we are the monsters in this topic and should be accepting responsibility and work on banning nuclear power.

i had a great time reading you post thank you so much i look forward to seeing what you have next thank you.