Would Robots Make The World Better Or Worse?

Home Would Robots Make The World Better Or Worse? 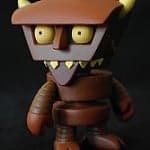 Hello, my name is Nestor Gutierrez i attend Oakland Unity high school. we’ve been learning in English about future robotic and artificial intelligent. A question we’ve been disgusting is if the robots would make the world better or worse?

I believe that the robots would not take over the world because the robots could only doing certain thing. But in the movie “I Robot” you’ll see robots doing everything and the humans just walking. But spooner believe the robots are going to take over and kill others and are dangerous but others do not believe him. later on the movie they find a robot the kills the make of the robots. But people believed that he killed himself but he did not a robot did. they found the robot his name was sunny he was a unique robot because he could dream and have feeling for others. later on the movie a main robot that controls everything its name was viki. it wanted to sacrifice human to make the population lower. So then the robots were attacking people. Then spooner and sunny needed to stop it so the humans would not die at the end they destroyed viki and no one died. At the end this is still a movie this is most likely impossible that a computer think of killing some one unless they are program to do it. Also, if we started to use robots most likely everything would be different because the engineers now and days are very creative and smart on doing something.  Also, these robots would not take over because they are only programmed to do a job and not kill others. And lets say you wanted a lawyer would you rather have a human or robot as your lawyer. A lawyer right, why them is because they have the knowledge on the crime you are doing. Even though you could program a robot to say what to say that would take a couple years but with a lawyer you could give them money and do the job. There is always a benefit of having a robot because if you take them to war they would no mercy on killing someone and with a human they might be scared or later would have PTSD (Post traumatic stress disorder) and would not be able to recover for a while. Also having a robot in war has a down side because the robot is programmed to kill anything that moves most likely. So what if there was a girl hiding from all the destruction and then the robot finds her and he would not understand that she is a innocent girl and then kills her. Also, another reason I do not believe the robots would not take over is because they would malfunction and then people might take months or a couple years trying to figure it out because there is a lot of programming to do one thing. And still believe that humans will still dominate on taking care of the world.