Would Donald J. Trump Launch Nuclear Warheads During His Presidency? 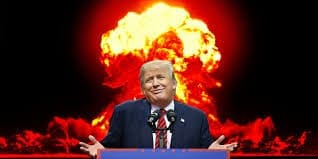 The question of the day is will Donald J. Trump launch nuclear warheads during his presidency?

I think that Donald J Trump should not be President because of his mental state and how the people voted more for Hillary Clinton than Donald J Trump.

With his mental state, it would be very likely that he will launch a nuclear warhead. He says that he will make the Mexicans pay for a wall. That is clinically retarded because who would pay for something that others want. He also said I’m going to blow the @#$% out of ISIS, etc.

Although he secured a position as “President of the United States,” he should not have the ability to nuke another nation, country, place, etc.

Your right. Remember that time Trump shaked his head violently at a news report for about six seconds? (I don’t). Also; form your own opinion before acting like a typical sjw