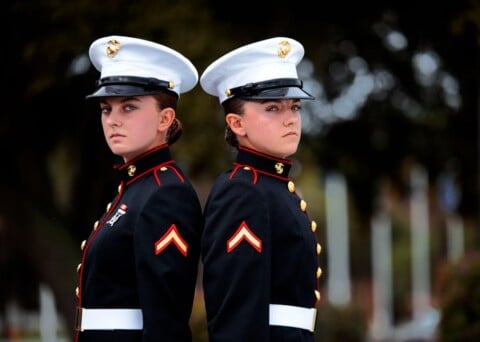 In the article, “Battle at Boot Camp” (upfront) I learned that combat jobs in the U.S. military were soon to be open for women. Many of the other U.S. Military branches have made a semi-decent transition to this change. The Marine Corps was the only service that looked for exceptions to the rule.  They believe that having gender integration would break the model that builds a marine. Strong bonds must be created, having both men and women in separate areas, then joining them together does not build a strong enough bond. Current and former Marines say that Marine leaders have an old-school mentality toward gender. They believe the Marine Corp will weaken if gender integration were to take place. Marine training bases in San Diego & Parris Island were the first to admit women. A few servicemen have referred to the integration as a “wake-up call” due to them “having to work more as a team.”

0
Do you think women should integrate into U.S. Military combat jobs, specifically the Marine Corps?x

I personally believe that women should integrate into the Marine Corp, that is if they can survive the pressures and adversities. Women and men think differently, which can be beneficial during combat. But there can also be a possibility of them holding the platoon back. This all depends on the mental and physical strength of the women, as well as their experience. Until then, we will not know the true outcome until it is done.

I can’t help but agree! If the women are able to pass the 13 weeks of boot camp and perform just as well as the men, then they should have the ability to serve in the same roles as them. I liked the mentioning that having a more diverse team doesn’t just promote better teamwork, but also allows for new ideas and thought processes to be presented in order to solve the problems Marines face.