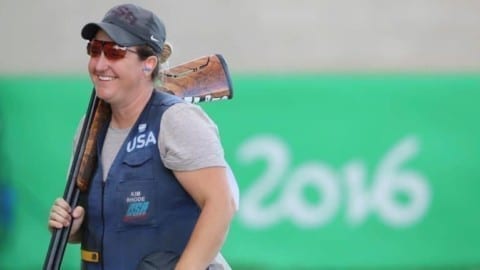 Kim Rhode was born and raised in 1979 at Whittier CA. Kim Rhode first began her Olympic career at age 17 at the 1996 summer Olympics. Kim’s current profession is a world-renowned professional shooter. Kim’s family composes of her son and her husband. Kim Rhode is an important person because she showed everyone women can be just as good as men at “manly” sports. Shooting has been in her family for 500 years according to Kim Rhode.

She won a world championship at age 13. Kim was the youngest female competitor to receive a gold medal in the olympics at the 1996 summer Olympics. She was the first person of any gender to compete on all three shotgun events. Kim is a 6 time Olympian. She was also the first American to compete in all five continents. However this wasn’t without obstacles, Kim lost 6 friends in addition to almost dying and giving birth prior to her 6th medal. One thing you can learn from this is that what doesn’t kill you makes you stronger.

As a human, I have a human question for you. Why did she almost die?

why is she important?

@Nathaniel I think because she is shifting the paradigm of gender stereotypes to encompass a female’s ability to be a competitor in activities traditionally deemed as “male” dominated sports. Also noteworthy is that she claimed titles and medals at such a young age.