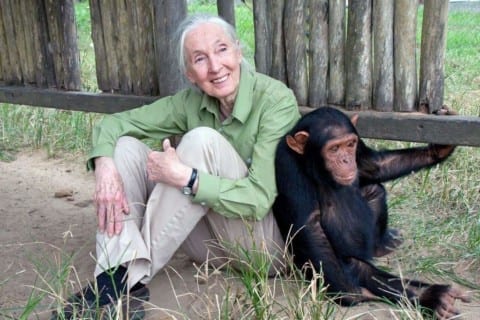 Since 1960 Jane Goodall has discovered and refined the way we study chimpanzees. Jane was born in 1934 in London, but her family moved frequently. Throughout her childhood, she was defined by her love of animals and nature.After she had finished school she could not go to university as her family could not afford it, in 1957 Jane went to Africa with a friend and adored it. She got a job in Africa as the secretary to paleontologist Louis Leaky. Leakey, impressed with Jane’s determination asked her to study chimpanzees in Tanzania, as he wanted a fresh view on the subject.

Jane quickly defied expectations by naming the chimpanzees instead of giving them assigned numbers. (this was expected at the time.) soon after her arrival, she witnessed a chimpanzee she had named David graybeard use a twig as a tool to catch termites, this was the first time anyone had seen an animal other than humans use a tool. Later Jane made another surprising discovery, chimpanzees are omnivores instead of herbivores. This discovery was made when Jane saw a group of chimpanzees hunt and eat a monkey.

In the following years, Jane received a Ph.D. in ethology (the study of animal behavior) and went on to become an independent researcher. Jane continued studying chimpanzees and published her first book, My Friends, The Wild Chimpanzees. Since then Jane has continued to write books as well as being an advocate for conservation.

I did not know that Jane Goodall existed and now I do know. Thank you.

Jane Goodall’s animal love started as a dream, then a reality! She would even do this with dangerous animals! She even received the PhD title in animal study, which was probably one of the best accomplishments.

this was a good article

wow this is so good it was so grate