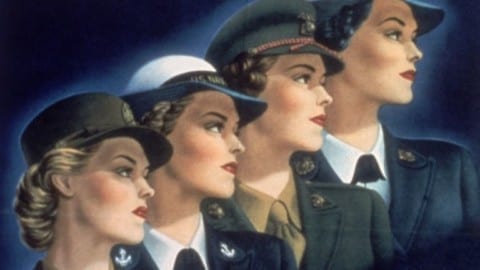 From the beginning of time, we as humans have been always finding a way to

define people into certain groups or categories based on how they look or the gender they were born with. If anyone tried to go outside of the group that is besides the norm, that person would receive backlash. Women especially have been put inferior to men and when women try to take on the same responsibilities as men, it creates an uproar of anger from those who believe in gender roles. Gender roles are a standard set by society that categorizes behaviors, values, and attitudes to a specific gender. Women in the past have tried to overcome these roles but it normally would end up in failure or punishment. At the end of the 1930’s a second world war was erupting but the power of women in the world was just starting to boom.

Before the war women were expected to stay home, tend to their families,

cook, and clean for them. When the second world war began, many men were sent away leaving the women on their own to raise their families on their own. Women’s roles transitioned out of their normal lives at home into the workforce and even for some, into the war. About 350,000 served the armed forces, at home and abroad (History.com Editors). Groups that the women could join for the war effort included the “Women’s Army Auxiliary Corps (WAACs), the Navy Women’s Reserve (WAVES), the Marine Corps Women’s Reserve, the Coast Guard Women’s Reserve (SPARS), the Women Airforce Service Pilots (WASPS), the Army Nurses Corps, and the Navy Nurse Corps” (“History At a Glance: Women in World War II: The National WWII Museum: New Orleans.”). Through these groups women got to take on larger roles in society defying what they are told they can and can not do. The women who worked from home transitioned into industries taking on the hard labor jobs that men normally would have. These women got to get down and dirty and do jobs they would get rejected from normally such as making tires, making parts for vehicles, and making parts for planes used in the army. The famous “Rosie the Riveter” was debuted during this era as propaganda to encourage women at home to come join the cause to help the nation at war (“History At a Glance: Women in World War II: The National WWII Museum: New Orleans.”). For the entire duration of the second world war women worked hard and long hours to help support their country and devoted their time to a greater cause while still running their homes without a man. Unfortunately, at the end of the war when the men came home, women were pushed out of work and encouraged to go back to their “normal” place in society as a stay home mother, a teacher, a nurse, or any other role women were set as before the war. Women received little to no recognition for their work until years even decades later. Though women were pushed away from the “jobs of men”, many were still able to keep their work. This began the slow but sure acceptance of women in work forces in which they were not expected to work in (Detail). Women began to rise up and prove themselves to men that they are capable of anything that they can do.

women in the world was just starting to boom. Women were finally given the chance to stand up almost equal to men. For many years before that women could never imagine giving their service as they did for their country and the jobs that arose for them to join. Women were finally just as important in the workforce and armed forces just as much as men were. This opened up new opportunities that would continue to grow and expand for women as the years passed by. The second world war opened the door for women and qualities and the beginning of destroying the unnecessary gender roles set for women.

Rory,
This was very well written. This is a very empowering topic to write about and I thought you did a great job emphasizing how far we have come as a society.