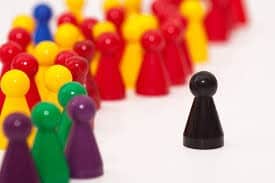 The Hired Girl deals with quite a few controversial topics that relate to American culture. One I would like to address here is the problem of prejudice. Prejudice has been present throughout American history and is not something that should be ignored. Regardless of what form that prejudice comes in, it has been present, even if it’s not recognized. And that specifically is what I want to talk about: unrecognized prejudice.

One of the first events in the book that involves prejudice is when Joan, the main character, is asked by the family that she will be working for if she is a Jew. This is her response, “I was as taken aback as if she’d asked me if I was an Indian. It seemed to me—I mean, it doesn’t now, but it did then—as though Jewish people were like Indians: people from long ago; people in books. I know there are Indians out West, but they’re civilized now, and wear ordinary clothes. In the same way, I guess I knew there were still Jews, but I never expected to meet any.” Anyone who reads this can see that there is some prejudice present. A focal point is when she says that Indians are civilized now and wear ordinary clothes. This has been seen as prejudice and has been addressed publicly (“Chant”). The issue is not just that what she is saying is prejudice, but that Joan does not recognize that what she is saying is prejudice because she doesn’t know better. This is a parallel that I see within American culture, and sometimes with myself as well. We as Americans will say or do things that are prejudice against certain groups not because we are trying to hurt, but rather because we don’t see what we are doing as a hurtful act.

Let’s take a look at a different form of prejudice. Joan works for a Jewish family, but she herself is Catholic and goes to mass at a Catholic church. The priest at the Catholic church, Father Hoist, does not approve of Joan living with a Jewish family and suggests that she work for a “good chatholic family.” Joan calls father hoist out for being anti-simetic and refuses to work for another family because the Jewish people she works for has been good to her (“Schlitz, Laura Amy”). After this argument, she does not go to mass for a few days, fearing that Father Hoist will not allow her to take the sacrament. However, Father Hoist did not bar Joan from the church. In fact, he sent  a letter apologizing for what he said, and admitted to his anti-simitisem. The key detail to notice here is that Father Hoist apologized (“Schlitz, Laura Amy. The”). He did this likely because he thought about what happened after the fact and realized he had been wrong. He likely acted the way he did because he didn’t know better. No one had probably ever called him out for being anti-simitimetic before, so the idea never crossed his mind. In that time, religious prejudice was common (“Schlitz, Lau­ra Amy, et”).

This next example also considers the idea of religious prejudice but in a different way. After Joan’s argument with Father hoist, she has an idea. She thinks that God would be happy with her if she was able to bring the Jews over to Catholicism and has taken to calling Catholicism, “the true faith.” She brings up this idea to the master, Mr Rosenbach. Mr. Rosenbach responds with an explanation, “‘Religion has much to do with loyalty.’ he was quite serious now. ‘I can never decide if loyalty is a different substance from faith, or the same thing. Please understand, Miss Lovelace: I’m not asking you to betray the god you worship. I’m only asking you to put yourself in my shoes. I am as convinced of the fruth of my faith, and as bound to be loyal to it, as you are to yours. I don’t think either of us should turn apostate.’” With this explanation Mr. Rosenbach has open Joans eyes to a new idea. He realises that Joan thinks that what she is trying to do is right and good, but she doesn’t realise that it can be taken as offensive and assertive. The idea of trying to understand what the other person is thinking or why they do what they do has probably never even tickled the webs of Joan’s mind. Indeed she probably did not think that trying to make someone convert from one faith to another was a bad thing. In this case especially, she thought that is was good. But this is a kind of prejudice in it’s own way because by thinking that the Jews should convert, it implies that Catholicism is superior. She does not see it like this, but this is the driving force behind her actions. Thinking that her religion is superior also means that all other religions are inferior, which is the definition of prejudice. Now we also see that this too is a prejudice that she doesn’t even recognize, and probably never would have recognized if Mr. Rosenbach had not shown her what she did wrong.

Many people many not realize it, but prejudice can be found in the most unlikely places. I have experienced prejudice and have caught myself being prejudice without intending to be. I have only been able to understand the problem by actively trying to understand and learn what is wrong with what I see or do. For most people in America though, this problem seems to be shrouded. The result: people say or act prejudice without trying. And the main reason is simple, people don’t talk about it. The solution, as we have seen in this book, is also relatively simple as well. If people had it explained to them why something was wrong – so long as they listened and cared – they would be able to recognize it and make a change in what they say and do.