With the growing deadly wildfires in California and the west coast, how can the whole country open its eyes to climate change and realize this is a matter of urgent justice?

Home With the growing deadly wildfires in California and the west coast, how can the whole country open its eyes to climate change and realize this is a matter of urgent justice? 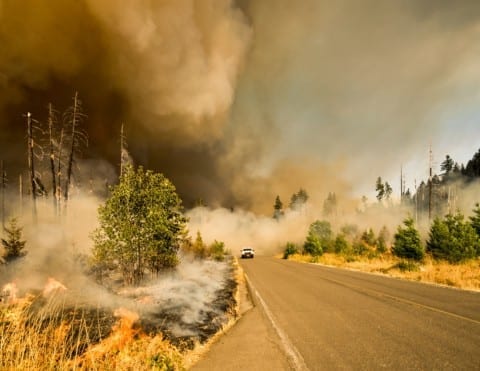 Since the Industrial Revolution, the amount of carbon dioxide in the atmosphere has risen from 290 parts per million to 390, with a steady incline of 2 ppm each year from burning fossil fuels.

This increased use of fossil fuels has caused temperatures to rise every year, Antarctic ice caps to melt, and larger wildfires such as the ones we have seen on the west coast this year.

The top 15 out of 20 deadliest wildfires in California history have happened within the past 20 years with over 4 million acres of land in California having been burned this year.

For example, the wildfire known as Camp Fire in 2018, is known to be the most destructive fire in the state’s history. It destroyed 153,336 acres of land, killed 85 people, and with economic losses between $3 million and $6 million dollars.

As the usage of fossil fuels increases, climate change is extending the length of the wildfire season as well as amplifying drought frequency and severity. Drought causes moisture stress in vegetation, which leads to higher susceptibility to wildfire.

As California’s population continues to grow, more people live in the areas highly damaged by the wildfires, impacting communities throughout the state.

As much as these wildfires damage the environment, they also have damaged the health of the communities within California. The particle pollution within the wildfire smoke can trigger asthma attacks, heart attacks, deaths, and premature deaths.

Based on current trends, by the year 2100, there could be 450 ppm of carbon dioxide in the atmosphere which could possibly melt all ice on earth.

To limit the further devastative effects of climate change, we must phase off fossil fuels with the next generation and help the reforestation of land impacted by forest fires.

I agree with your argument Miles. I think you started your argument very strongly using numbers and facts. As we learned in class this is the use of pathos and even logos appealing to emotions and using numbers and facts. I think a big key part your article is missing is citing the source and providing links in the text to make it easier for you and the reader. But other than that I think you presented a good argument on how the world should see climate change more.

I agree with your argument completely. Everything you said was true and terrifying. Our climate is changing and heating up at an alarmingly rapid pace. I think what you said about how it’s not only damaging our climate but how it is so damaging to our health was an important statement. A surprising amount of people on this planet simply don’t care about it and how we are running it because it will not likely affect them in their lifetime. Do you think that if more people knew how bad it is for us they would care more and do more things to help our world?

I think this post is interested and scary because the climate has changed the others days it was good and now the sky looks ugly with so much smoke.

I think that this post is very interesting and scary. Climate change is growing very fast and this is scary for the future of our environment. The fact that all ice on earth is going to melt by the year 2100, is a very sad fact. I know you mentioned that fossil fuels need to phase off, but can you think of any other ways to save our environment and stop climate change? Here is an ad for 100 ways to end climate change that might help. https://landing.pachamama.org/climate-change-solutions-course?utm_term=climate%20change%20solutions&utm_campaign=Drawdown+Online+Course&utm_source=adwords&utm_medium=ppc&hsa_tgt=kwd-294757895902&hsa_grp=81537677881&hsa_src=g&hsa_net=adwords&hsa_mt=b&hsa_ver=3&hsa_ad=381292798683&hsa_acc=3809916187&hsa_kw=climate%20change%20solutions&hsa_cam=6486018216&gclid=CjwKCAjwlID8BRAFEiwAnUoK1VIUggnC9gjbFDjhHt_nrNxgogHh4Bj481EsJxql4sLxPdsFdOm2hxoCiKsQAvD_BwE

I agree with everything you are saying and I would like to add that corporations produce just about everything we buy, use, and throw away and play an outsized role in driving global climate change. A recently published report identified that 100 energy companies have been responsible for 71% of all industrial emissions since human-driven climate change was officially recognized.