Will Policing In Schools Lead To a Better Sense of Security 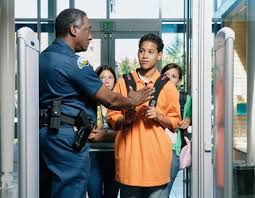 Gun violence is a problem that America has been struggling with for a long time. Events like the  Manchester shooting and the shooting in Parkland school have left families broken and our country devastated. But right alongside those shootings are the ones of young, unarmed, African American men like Stephen Clark being shot by the police. This conversation has allowed for some tension on the topic of gun violence.

There are two conversations going around on the topic of gun violence. On one hand, you have those who are fearful for the safety of their kid’s; protesting for action to be taken to better protect schools. Then, on the other hand, you have those protesting against the continued deaths of African Americans by the hands of the police. As a result, the agenda of both “movements” have begun to collide. In an article from The Atlantic Police Shootings Are Also Gun Violence the author Vann Newkirk II talks about how advocacy can lead to a disregard of the past. Since the events of these mass shootings security measures in schools have increased, which is a good thing because it means the school is well protected. But it also “amplify the danger that students of color already face at the hands of resource officers.”

Another article from NPR Here’s How To Prevent The Next School Shooting, Experts Say talks about other ways of preventing school shootings. Matthew Mayer, a professor at the Rutgers Graduate School of Education, says “No matter what you try to do by just hardening the target, we’ve learned that having the armed officers isn’t necessarily going to stop it.” He proposes focusing on the root of the problem by doing your best to lower the “background levels of bullying and discrimination.”

In conclusion, gun violence of any kind is awful and can ruin many people’s lives. An increase of policing may bring a sense of security to some, but to others, it’s a reminder of an even deeper issue that ‘s still left to be resolved. So we should look more to prevent these issues by focusing on mental health in schools as well as bringing in an environment of friendship and community.