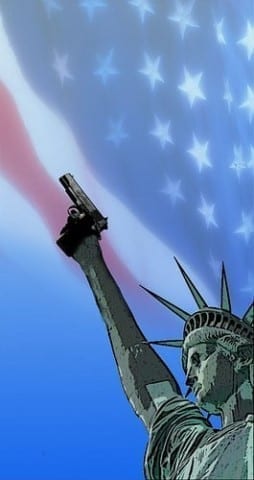 With school shootings growing in popularity, teenagers are feeling increasingly unsafe at school. Many of the people who are doing the school shootings are mentally ill, and should have never had access to a gun. Also, the multifre machine guns should be banned, because those are not neccesary for self protection. When it comes down to the baseline problem, people are able to obtain firearms that they never should have been able to purchase.

The U.S. has 120.5 guns per 100 people. The 2nd ammendment says that all Americans have the right to bear arms. However, a lot of these times guns are bought with the intention oif hurting others rather then self protection. During Obama’s term he said there should be more thourough background checks for people buying guns. With the rise of schools shootings, how details are these backgorund checks?

According to “New Republic”, all guns should be banned. For this to happen, people who aren’t politicians have to speak out. It is ingrained in Americans minds that banning guns is impossible. It’s not about saying there are good and bad gun owners, it about placing all guns into a category that’s bad. All guns should be banned, because it is never okay to take someone’s life.

Hailey that guns can be dangerous and kids feel unsafe at school, but there are a lot of ways you can look at this. Some people may think taking away guns would help but that’s not fair to people who may hunt and use good use to what they do with their guns. The gun checks should be more detailed to people with guns because some people don’t need to have them. The self protection reasoning is tough though because people are not exactly using them in the right way of “protecting themselves”. This is a debate that goes on a lot and is hard to make a good decision on.

Hailey,
There are many different viewpoints on this article and it is an interesting debate. However I disagree with how you have built your argument, the first statement of school shootings “increasing in popularity” was immediately off putting for the simple reason that the word “popularity” should never be acomponied with such a tragedy. Also you offer many opinions from one side of the debate, but don’t offer any information from people you don’t agree with to show that you are knowledgable on the issue. Although everyone agrees that in a perfect world there would be no guns, this is not a perfect world, and the unfortunate reality is that guns will always be in circulation and if someone has drive to commit an atrocious act such as mass shootings they will do whatever it takes. In the connotations you’ve presented the only victims in this situation would be defenseless law abiding citizens.

I’m glad you’re passionate about this topic. However, “multifire machine guns” is a made up term. If you’re talking about fully-automatic weapons, those are already banned to the public in the 1993 Assault Weapons ban. As for banning all guns: guns are not the problem. You take away guns, then psychopaths will find other ways to harm and kill people. While the law-abiding citizen is left defenseless. I do agree however that we have a mental health issue in this country, but that does not involve firearms and restricting them even further to the law-abiding citizens.

“you are dis disrespecting a future marine sergeant.”

I think all of these points are legitimate and well spoken, but I think this sarcastic remark with no purpose but to make fun of someone commenting doesn’t contribute to the discussion of the issue. Whatever side your audience stands on, all points of view should be respected and comments should contribute, not take a stance of making fun of an individual’s very possible ambitions.

I really enjoyed reading your post. I think the part about the 120.5:100 ratio was very good and an interesting statistic. I found an article that explains how it’s difficult to talk about this topic, and I think you might like it. ( https://www.nytimes.com/2018/09/09/insider/ian-urbina-father-gun-control.html?rref=collection%2Ftimestopic%2FGun%20Control&action=click&contentCollection=timestopics&region=stream&module=stream_unit&version=latest&contentPlacement=4&pgtype=collection )

I hope to hear more from you,
-Tarek

I agree that there should be more gun control especially for schools.

i agree that guns are dangerous and that they r used to kill people but ,in my opinion us human is the biggest issue because we are the ones that kill people we Gotta find those who are capable of doing crazy things with guns .i agree that gun is a big issue but people are the biggest issues cause guns don’t
‘just come up to u and kill u ,is us humans who do it .So what i,m trying to say is that we shouldn’t focus a 100%of the the gun issue ,we should focus more on the ones who do it or capable of doing it .