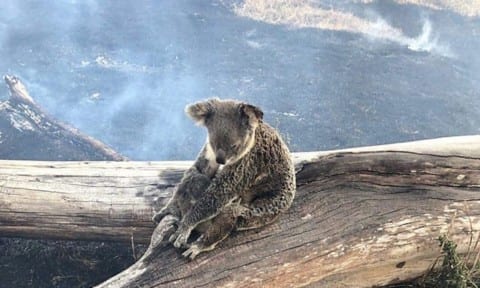 In recent years, I have been seeing so many news about wildfire. Whether it’s Sichuan, Los Angeles or the recent worst Australian wildfire, this natural disasters have caused countless lives died. “A wildfire, wildland fire or rural fire is an uncontrolled fire in an area of combustible vegetation occurring in rural areas.”

According to Australian media reports. Nearly 500 million wild animals were threatened by the fire. In New South Wales, thousands of animals tragically died on the sides of the highway; countless scorched animal bodies piled up .

Many people may think: I am not in Australia, the fire will not burn me, and it will not affect me. But the truth is’ according to NASA satellite images, the smoke from Australian mountain fires across New Zealand and a Pacific Ocean. In less than a week; it spread to South America 12,000 kilometers away; cloud formations larger than the continental United States

Across Australia, nearly 18 million acres of land have been burned and released nearly 350 million tons of carbon dioxide. No one can guarantee that these will not affect the global warming and the environment. “Wandering Earth” have predicted, “In the beginning, no one cared about this disaster, it was just a wildfire, a drought, the extinction of a species, the disappearance of a city. Until this disaster related to everyone …”

I am solemnly amazed by your post, “WILDFIRE” because I agree with your statement of wildfires being super important even if it doesn’t really affect you as an individual. I think that it is really surprising how many people just hear the news of wildfires and just let it be because it won’t affect them right away. It is super tragic how 500 million animals are endangered within any type of wildfire that happens in the world.

One sentence that stood out to me that you wrote was “Many people may think: I am not in Australia, the fire will not burn me, and it will not affect me.” I believe that this sentence brings upon so much importance because people should care whether or not they are where the wildfire occurs because then the outcome of the tragedy can reach the places where we are and in the end affect us also. No one is technically safe from wildfires because of the effects that slowly impact our environment, which in this case, global warming.

Thank you for your writing. I really look forward to reading any other post you decide to post because you have the mentality of seeing what is happening and is the subject to be important and not be ignored. I enjoyed your post with your factual statements about wildfires.