Home WHY WE NEED ZOOS!!! 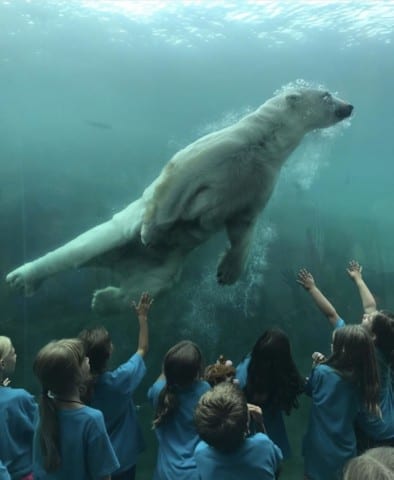 Zoos do a great job in informing the public about endangered species and what needs to be done. If it weren’t for zoos many people would not know about various species and many animals would have possibly gone extinct due to people just not knowing about them. According to Dr. Dave Hone with the Guardian, “Many [species] are already extinct in the wild and only survive because of populations kept going in captivity.” It is important to realize that without zoos smaller animals that are not as popular as the elephant or the lion would have been long gone if it weren’t for zoos. Although these animals do not live out in the wild at least they are alive and are able to educate the public about similar smaller species like them who could possibly also go extinct.

Climate change has become a serious problem for species in the Arctic. Animals such as the polar bear or arctic wolf are facing serious problems due to the shrinking ice in the Arctic. According to Dr. Dave Hone with the Guardian, “[C]limate change has already harmed over half of all mammal species on the endangered species list… and that is only likely to increase as more species are put under pressure from climate change and other environmental pressures.” Thanks to zoos, these animals have a future. Their future in the wild has become impossible due to the rapid changing they are experiencing in their environment. It is sad to think that in my own lifetime it is possible that an amazing, strong animal such as the polar bear could go extinct in its natural habitat and that the only thing keeping them on our Earth is zoos. I am grateful to zoos for protecting these animals and showing the public what amazing creatures we could lose if we don’t make a change.

Not only are zoos good for conservation and education but they also help with helping wild animals. According to Dr. Robin Ganzert with Time Magazine many zoos are coming up with vaccines to give endangered wild animals who would otherwise die due to the disease.

Hey Pauline,
I thought your post was very thorough in how zoos are very beneficial. You presented numerous positive impacts of zoos that I can totally understand. However there are a lot of cases where animals in zoos were very mistreated that you simply cannot avoid like Harambe. Take this article for example that gives multiple examples: (https://www.lcanimal.org/index.php/blog/entry/five-tragic-zoo-incidents-that-didn-t-have-to-happen).

Hey paul! I really enjoyed reading this post. It made me have a new outlook on zoos and I realized how much they help endangered species and to educate people on different animals. Here is an article more on how zoos are helping! https://www.globalanimal.org/2016/02/25/are-zoos-good-or-bad/71442/

Hi Pauline,
I really enjoyed your article and respect how you wrote from the opposite side than the majority of zoo articles on the internet do. You found the beauty and positivity in zoos and revealed how they can be beneficial to endangered animals which is something not a lot of people understand. I found another article that provides information on how zoos can act as a vital conservation lifeline for some of the world’s most endangered species: https://medium.com/taronga-conservation-society-australia/why-the-world-needs-good-zoos-more-than-ever-fc098b575a0e