Why the Long Face Gen Z? 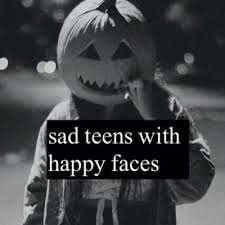 Teens these days have more resources for information and communication than ever before, it’s something that our parents never even imagined at our age. With all of the modern perks of being a teen today, why is suicide the second leading cause of death for kids ages 15-19 and 67% of teens ages 12-17 report having depression? Could these rising rates of teenage depression and suicide be linked to modern ideologies and tools?

Mayone clinic defines teen depression as, “a serious problem that causes a persistent feeling of saddness and loss of intrest in activities.” Thay explain that teenagers are highly emotional because of the hormonal imbalances caused by their maturing, this means it can be very difficult to distinguish between a teenagers overpowering feelings, or depression. Could this have anything to do with the rising rates?

CBS did an interview with the parnts of teenagers that died by suicide to try and understand better what causes these feelings of hopelessness in the young adults. One parent brought up the fact that social media had a strong part to play in his daughters death because of people and images that normalized self harm. Another parent agreed because their son died because of cyberbullying after he came out as gay. This may not be the case for all teen suicides and suicide attempts, but social medis seems to be a trend throughout many.

Although the technology we have today is a great resource and it makes everyones life more convinient, sometimes it can be used in the wrong way. Teens growing up with this technology are still learning how to use it properly and this can be one reason for teen depression and suicide. Learning how to be safe online and ignore certain comments, stories, and images, could save lives.

Hi Maggie,
It’s a really striking phenomenon that our generation has such a high rate of mental illness and suicide. I found another article that compares our rates of loneliness with those of previous generations, and Gen Z has the highest rate of loneliness compared to past generations: https://www.npr.org/sections/health-shots/2018/05/01/606588504/americans-are-a-lonely-lot-and-young-people-bear-the-heaviest-burden