Home Why Parties Might be Useful to our Government. 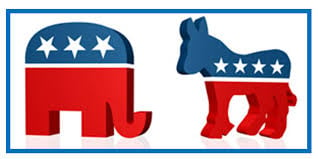 Since our the constitution was founded, creating our government that we all know today there have been people who believed that parties would tear our country apart and one of those people was George Washington. Washington despised the ideas of partied believing it to take away the last bit of democrat freedom we had left and tried his best to set our country off with no parties. This did not work though and parties formed anyway creating the big two groups that we all know, the republicans and democrats.

Parties might not be all that bad for us doing everything that Washington believed they would do. I read an article about the benefits of parties and it makes some good points for how parties have actually made our country evolve. The author first talks about how the America today run by parties is much different than the one that Washington knew mainly, “is not just geographically bigger, but immeasurably larger in both population and diversity”(Hamilton). This is where he believes parties excel they, “accommodate different interests, opinions, and views”(Hamilton). He believes parties have educated people to vote and what their voting on, are great consensus builders and are effective at getting the things our country really needs to pass passed.

This article brings up some great points about how our government has developed and how the people of our country have been represented fully. With the partied being census building and big enough to combine different groups brings representation in each party to a greater level representing not only their little group but hundreds if not thousands of groups all combined together into one big group. Also having two major parties rather than thousands of smaller parties allows the really important things in our nation to pass easily without dozens of groups all arguing and disagreeing. From the time when Washington was president our country has gone from 4 million to 330 million so attempting to represent all those people without some sort of party to be there representation for them. Parties have helped move our country forward and have united people to agree on common ideas throughout the years.