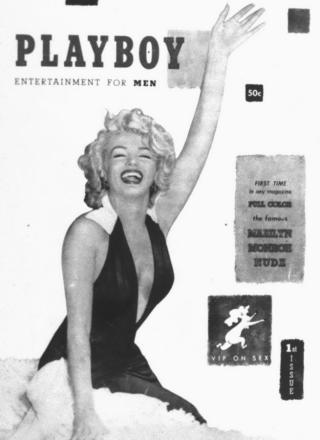 After becoming a well known pinup model, Ben Lyon, the casting director of 20th Century Fox, had Marilyn do a screen test for the silver screen in 1946. This led to a six month renewable contract and new opportunities for Marilyn. Although a triumph for Marilyn Monroe, her husband, Jim Dougherty, thought otherwise after returning home from the war; the couple got a divorce that same year. This was a transformative year because up until then she was going by her birth name, Norma Jean, but Lyon created a screen name for her: Marilyn Monroe. Marilyn after the 1920s star Marilyn Miller, and Monroe after her mother. A star was born.

Marilyn had stared as extras in productions such as, “Scudda Hoo! Scudda Hay!”, but her contract was not renewed until she made a new deal with Columbia Pictures in 1948. She made her first debut in the film, “The Ladies of The Chorus”, but her contact with Columbia shortly ended after that. In the midst of financial troubles and making her name, Marilyn was in desperate need to make quick money. Thus, brings along the 1949 nude photo scandal.

Tom Kelly saw that Marilyn needed quick money and so he suggested to take nude photos of her for $50. It was soon widely known that Marilyn posed for this photo, but she was able to convince the public that she just need the money. This event led to Marilyn Monroe booking a shoot with Hugh Hefner for very first Playboy magazine. This sold very well not only because Marilyn’s nude photo scandal heightened her fame beforehand, but also because Hefner labeled her as the “Sweetheart of The Month” on the cover.

Near the end of 1949, Marilyn Monroe made her big break with the film Love Happy, leaving her with a guaranteed contract with 20th Century Fox again. This is where monroe’s career really picked up. The Hollywood bombshell took the industry by storm, performing in films such as Niagra, Gentlemen Prefer Blondes– where the iconic song, “Diamonds are a Girl’s Best Friend” was created- How to Marry a Millionaire, River of No Return, and There’s No Business Like Show Business.

It was through these films Marilyn made a name for herself and the industry that will last for decades. She was unapologetic with her sexuality and promiscuity, using it to further the way women would look at themselves in the many years to come. Unlike the pursuit to stay thin in the 1950s, Marilyn – being a curvier woman for her time period – encouraged the idea that having hips and a chest was, and should be, desirable by a man.

Acting in these iconic films would produce Marilyn Monroe’s signature makeup look, which would, without a doubt, have an influence on women’s beauty standards. Marilyn had long eyelashes, a long eyeliner-winged-look, volumsciuos red lips, and glowing skin. It is rumored that Monroe’s beauty routine took a great deal of time to complete, including several detailed steps to achieve her overall, drop-dead-gorgeous, look. For instance, to achieve the specific red for the cameras to transpose, her makeup artist used five different shades of red lipstick to contour her lips. Just from the layering of product alone made her lips look bigger and desirable. One beauty trick that she frequently used was to put vaseline on her face before foundation or powder, to achieve that naturally glowing look and moisturize her skin simultaneously.

Part Three of my argumentative essay will be coming soon; hang tight!

I love this continuation of Marilyn Monroe’s history. It shows the huge impact she ad on others, and alludes to why it’s such a shame er history isn’t remembered more in depth more often. That $50 basically started an empire. It’s also kind of feminist for the time. Women are still getting shamed for photos they took getting leaked on accident, but Marilyn was able to take it and make a career. It’s also juxtaposed with her divorce. It seems like her husband really didn’t like her newfound independence.