Why is procrastination so prevalent among students?

Home Why is procrastination so prevalent among students? 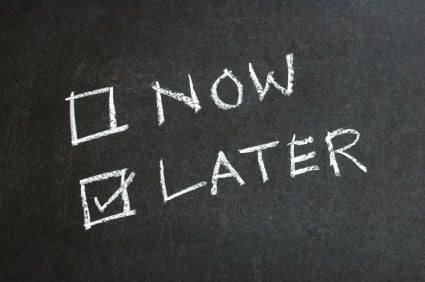 As high school senior, I’ve seen and performed my fair share of procrastination throughout high school. Sometimes it’s little assignments, sometimes it’s a paper that decides your grade for the quarter, either way it’s not uncommon to be up until 3:00 in the morning the night before it’s due, doing things that you should’ve been doing days or even weeks ago. Among my peers procrastination is practically accepted, the people who do things on a reasonable schedule are harder to find than those who grind out hours of homework at the last second. So as a self-induced victim of procrastination, why do we do this to ourselves?

The obvious reason for procrastination comes from the simple fact that school work isn’t necessarily appealing, especially when there’s any number of more satisfying things you could be doing at home. A 2016 Washington Post article would also link this to a lack of self control, similar to those that cause overeating or overspending problems. However, they also would support that it’s a deeper issue than what it may seem, in that many high achieving students still procrastinate. Procrastination can also be considered a behavior developed through desire to avoid certain tasks, due to surrounding anxiety or fear. For students this can be a result of not understanding a topic, or being of a mind that not trying and failing is better than trying your hardest and failing. A combination of many different factors ultimately produces students who get by putting things off until the last seconds, for better or for worse.

An article from Oxford Learning focuses on preventing procrastination in younger students from a parent’s perspective, but many of their tips would also benefit older students. They say that procrastination can come from any number of things, and identifying that is the first step into solving the problem, but general organizational and time allocation strategies can make a huge impact on overall productivity. Despite all the resources available to students on how to overcome procrastination, a surprising number of students still succumb to it.

I’d like to know if this is a relatively new or growing issue for today’s students. Has procrastination always been so common or are the growing distractions of today leading into lower productivity? What in schools today does combat procrastination and lead students into more efficient usage of time? When do these habits begin to form?

Dear, Ed
I agree with you that procrastinating is an issue to teenagers as well as me. One reason I say this is because I know, I procrastinate a lot even my teachers tell me, I’m in my freshman year and I always wait to the last minute and end up sleeping at 1 or 2 in the morning and I end up failing. Procrastinating is extremely relatable to me and I wish it wasn’t an issue for me and I didn’t expected that other people where procrastinating too but now that I have read this I know I’m not the only person going through this issue and it got me really interesting. Thank you for writing. I look forward to seeing what you write next, it really caught my attention and I really like how you share something really relatable to teenagers.
Sincerely, Karyme <3

I am interested in your post because I could relate to it. Starting mt freshman year I would wait until the last minute to get something done, whether it is an assignment or studying for a test. I am now in my junior year and I now noticed that it is much easier to get stuff done earlier. For me, it was not worth staying up to 12 or 1pm to get something done, I wouldn’t be able to sleep if I didn’t get it done. It makes me feel much better when I finish school work early.

hello! This was very interesting to read, and also incredibly relatable. I am too a senior in high school, and I find myself procrastinating all the time. all the time. I find myself staying up the night before a big test, cramming information into my brain. I too wonder if procrastination is something everybody has always “suffered with,” or if it is just our generation. Possibly because the pressure of school and getting into college has increased, that may have caused our procrastination to increase– just a thought.
Jessica