Why is police brutality such an issue?

Home Why is police brutality such an issue? 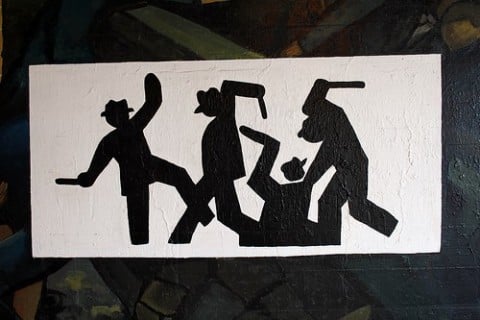 Police brutality is one of the most polarizing issues in the nation today. I hesitate to even write these words because I know I will be criticized for my point-of-view. But it’s an issue that needs to be talked about.

First off, there are so many reported cases of police brutality and corruption that it would not be possible to list them all. So I’ll stick to something more recent:

“It was around 4 a.m. on Dec. 5 when Natalio Conde woke to the sound of men moving through his railroad apartment on Brook Avenue in the Bronx. He was frightened. Ninety-two years old and in fragile health, he knew he was no match for intruders. Then he heard a commotion and saw his brother-in-law, Mario Sanabria, 69, in the doorway. Mr. Sanabria had lived with him for seven years, looking after his food and medicine in return for room and board. The lights went on. Mr. Conde said he saw a burly man pushing Mr. Sanabria into the room, holding him by the collar. They were close together, no more than a foot apart, he recalled. Mr. Conde pulled the sheet up over his head and lay back, pretending to be asleep. ‘What’s happening?’ he heard Mr. Sanabria say in Spanish. Then he heard a shot. ‘It was like a bomb going off,’ he said. The men turned out not to be robbers, but New York City police officers from the elite Emergency Service Unit executing a search warrant. Dressed in tactical uniforms, they had broken down the door without warning and searched the apartment, room to room. A few hours later, the Police Department’s chief of patrol, Terence A. Monahan, said that Mr. Sanabria, who spoke no English, had confronted two of the officers with a machete. Mr. Sanabria refused an order to drop the weapon and came toward them, the chief said. An officer, later identified as Detective Ruben Leon, fatally shot him once in the chest. Mr. Conde said that in the seconds before he took cover, he did not see a machete in his friend’s hand. The machete that the police recovered belonged to him, he said, not to Mr. Sanabria. It was a souvenir from the Caribbean — and he kept it behind a door in his room. He said he doubted Mr. Sanabria even knew where it was. The family of Mr. Sanabria, who worked for decades at an ice cream factory in the South Bronx, has sharply disputed the police account of his shooting. The police were not looking for Mr. Sanabria, but for his nephew, Miguel Conde. The officers had received information that Mr. Conde — Natalio Conde’s 38-year-old son — had a gun and narcotics in the apartment, the police said. But they found no drugs or weapons, beyond a crumbling stub of a marijuana cigarette and a pocketknife, Miguel Conde said in an interview. Mr. Conde had been taken into custody when he showed up at the building hours after the shooting, but after being questioned for several hours, he was released with a summons for the marijuana and the knife.”

I am not cherry picking here. If you want to find more accounts, you’ll find them. Don’t worry, it won’t be hard to find. With the technology we have today, we are able to broadcast the problem with ease, “Today, live streaming, tweets and Facebook posts have blasted the incidents of police brutality.”

But back to the above account. There are so many things wrong here. But I want to focus on one aspect, an aspect that is summed up by the family’s lawyer: ““Five police officers can’t figure out a better way to take down a guy who is 69 years old and all of 5-4 and 160 pounds, other than shooting him the chest?” Police officers are supposedly well-trained to deal with violence and intense situations, yet shooting the man was immediately resorted to. Why? If the man was putting up a struggle, why not use a baton or a Taser, why the gun?

This can represent two things. Police officers are in a power position and they love exercising that power onto other people, or the police officers are in fear and they resort to violence for the fastest solution. Whichever is the case, there is definitely a problem here, no one can deny it. Having cameras attached to the police officers, like some states have implemented, helps a lot, but it needs to be so they can’t turn it off or “unexpectedly turn off”. Or if the problem lies in the ladder, more funding and attention should be given to the training of police officers to combat that fear. Now I’m sure it’s stressful to be a cop, but unfortunately cops have a huge responsibility, and we as citizens have the right, and duty, to ask more from our police force.

Bobby,
Interesting article and I agree that the issue is very prevalent in today’s society. Not necessarily that it is worse than before, but rather that it is more documented than ever. Police and citizens are put in a position of danger in the lack of trust between the two groups. Police officers are no longer as respected as they were before, raising tension for both. I think there’s definitely groups affected by their position of power as shown by results in the Stanford prison experiment. Hopefully, there will be a way to solve our issue without too much more violence.