History is Happening in Manhattan

Home History is Happening in Manhattan 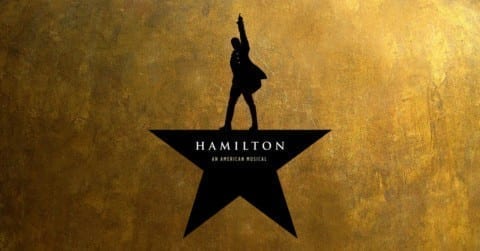 In case you have been living under a rock for the past year, Hamilton is one of Broadway’s newest and most acclaimed musicals of all time. In my opinion, Hamilton exceeds every other Broadway show by far.  It was nominated for a record 16 Tony nominations, received the Grammy for Best Musical Theatre album, won the Pulitzer Prize for Drama, and it debuted #12 in Billboard’s Top 200, which is the highest for a cast album ever (Caulfield). It is based on the life of, yes, first Secretary of the Treasury, Alexander Hamilton. Oh yeah, and it’s a hip hop musical. This combination may sound startling, but Hamilton has shattered every expectation of Broadway and it is creating its own form of art, making it the best Broadway show of all time.

Hamilton is the best musical because even though it takes place in the 1700s,  it rebels against every image you would traditionally expect from the founding fathers. It is the first musical to enact entirely color blind casting. In Hamilton, there are no white men with gray hair. Instead, Alexander Hamilton is portrayed by a Puerto Rican man, George Washington and Thomas Jefferson by African Americans, and Eliza Hamilton by an Asian-American. It has always bothered me that there is a surplus of roles for white men on Broadway, and considerably less for women and minorities. The show’s creator (and star), Lin-Manuel Miranda, was bothered by it too, so he purposefully created an extremely diverse cast. The show does not portray 1700 America, it resembles what America looks like today: a sea of different ethnicities.

Hamilton also defies every Broadway stereotype by crossing music genres, making it sound starkly different and refreshing compared to other Broadway musicals. Hamilton’s music is entirely rap and hip-hop. I would have never expected hip-hop and the founding fathers to work well together, but the fit is shockingly perfect. Before I discovered Hamilton, I only listened to the typical, jazz-hand style Broadway show tunes. However, Hamilton introduced me to the world of hip-hop, and it is doing the same by introducing those interested in hip-hop to Broadway. It is bringing two very different worlds of people together in the best way possible.

On the other hand, as a result of Hamilton’s skyrocketing popularity, it has become extremely difficult to get a ticket to it. Is it really the best musical if its fans can’t see it? At Miranda’s last performance with the show in June 2016, Hamilton tickets were selling for up to $20,000 each (Rayner). The tickets have gone down considerably since then, but they still range from $400-$800. Although Hamilton is an incredible show, many of its fans can not afford the money to see it, so they may not be able to see for themselves that it is the best show. It would be a lot easier and less expensive to see alternative Broadway shows. I am lucky that I have gotten the chance to see Hamilton, and I feel like I can fairly say it deserves all of the acclaim it has ever received. The night I saw Hamilton was the best night of my life, and I cried tears of joy the entire show. However, if you are a fan that cannot afford to see the show, its cast album is more than enough to help you fall in love with its cutting-edge style.

What’s interesting about Hamilton is that it is extending so far beyond the world of Broadway; it is influencing the entire world in a way no other Broadway musical has done before. Back in April, Treasury Secretary Jacob Lew was leaning towards taking Hamilton off the $10 bill, until Lin-Manuel Miranda convinced Lew, and after seeing Hamilton with his wife, Mr. Lew allowed Hamilton to keep his place on the bill (Calms). After holding a Hamilton event at the White House, Michelle Obama referred to Hamilton saying, “It was simply, as I tell everybody, the best piece of art in any form that I have ever seen in my life” (Desta). Hamilton was even quoted by Presidential candidate Hillary Clinton in her acceptance speech at the Democratic convention. She quoted the line, “What is a Legacy? It’s planting seeds in a garden we never get to see.”  When have you ever heard our political leaders quoting a Broadway show before this? Never.

There is nothing “normal” about Hamilton, and that is what makes it the best musical of all time. It is shocking how relevant its themes still are today, even 250 years after the time the musical is set. Hamilton breaks all walls previously placed around Broadway shows. It is allowing people of color to portray all types of roles, forming the bridge between Broadway and hip-hop, and it is influencing the world both inside and outside of Broadway. It has opened my eyes to how impacting the arts are, and how rewarding taking risks can be, even if it means combining the founding fathers with hip-hop.

Dear Cami,
I agree with your article called “History is Happening in Manhattan”. I really enjoy the musical but your article did provide me with new facts that I was not aware about. I didn’t know about how big of an influence Hamilton has made on the world. I knew Hamilton was an inspiration but I didn’t know about Lin Manuel Miranda being able to convince keeping Alexander Hamilton on the 10 dollar bill. I did enjoy reading this seeing the opinion of other fans other than me. I really liked how you included how diverse the cast of Hamilton is. It made me see how unique Hamilton is changing and breaking barriers. I look forward to reading more of your articles that might be able to introduce me to new musicals, art, and music.
Good luck,
Jana