Why do many people look at Childish Gambino’s video, “This Is America” as a message to society?

Home Why do many people look at Childish Gambino’s video, “This Is America” as a message to society? 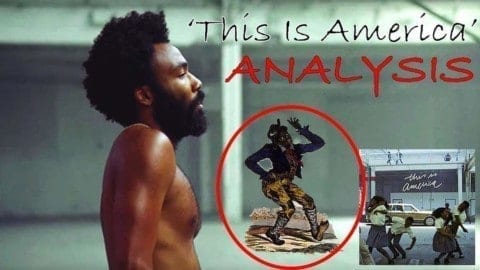 When the video starts the camera zooms in on Childish Gambino, he turns around and starts to dance . His dance moves him toward a man sitting in the chair playing his guitar. Gambino shoots the man in the back of his head and appears to be unaffected by his actions. In the video , There is a theme in this video, everything starts off calm and happy until Childish Gambino shots someone they die. As he moves on, other people came out of nowhere and start to clean up the act. And throughout the video you hear, “This is America – DON’T CATCH ME SLIPPING. IMMA GO GET THE BAG.”

My thoughts on this video are good because i think it gives the viewer the need to which your back. And when the kids came out to dance they seem to react in a way they shows the violence around them is totally normal. We are reminded that you can look good and have a lot of stuff but someone out there, with evil intentions may try to take what you have cause it’s what they want .

This is America, shows that often many people get away with their crimes; always watch your back. If you are trying to live and help yourself there will always be someone watching you in every step you take. And if you get caught chances are, you will be given a harsher consequence, it’s quiet for you. Don’t expect anyone to come to help you. There are numerous examples of the a authorities covering up for their own safety, leaving the innocent hopeless and alone.

You not going to get what you need unless to you tell someone a lie or snitch on someone as if it’s the truth. Either way you are still going to get messed over. They will get what they want even if you suffer because It’s America. Gambino’s line, ‘’Grandma told me Get your money, Black men(Black men)’’ he is saying “black” ,meaning, black people, instead of sitting down and blaming other people to take responsibility for their actions.

There are some confusing images in this video. At one point, there is a man who walks towards a chair. He is dressed as if he was a slave picking cotton in the field. He does not have shoes, it is a sad and startling image. There is a message, a confusing one, that will be interpreted differently by different people. Another vexing moment are the numerous people who willingly cover up the violent acts, which allows the next terrible thing to happen. Because some crimes aren’t solved they encourage  other crimes to increase. People are losing hope. They are seeing others advance while they are struggling day-to-day to help their own. There are people trying to be open minded, however seems almost common to see police officers are getting away with killing babies, teenagers, and adults.

Throughout the video Gambino gives signs and hints that could be naked to the human eye. A viewer may wonder if Childish Gambino is also creating controversy by making references to the illuminati by the way he wears his pant leg, having one up while the other is down. There could also be messages in the background such as a mysterious man in black riding a white horse being chased by the police and the delicate manner in which the weapons are taken away after each shooting. It is easy for many people to get distracted and and miss focusing on the big picture. It is not an accident that Childish Gambino shoots a man he declares,‘’ This is America Don’t catch you slippin’ up’’ and he starts to  dance, getting away with the murder.

Repeated in this video is the phrase, “don’t catch up slippin ‘up” over and over again and also, “look what I’m whippin” is relating to the government. We are told how “they have made a plan” and how well they are doing. Regular people see what the government is doing and it never seems to really help. Regular people can’t do anything about it because it is easier to dictate, declare otherwise and cover up. The references to slavery throughout the video is not only what happened in the past, it is a current reference –  blacks are still running to be free. They ran to the underground railroad to be free a century ago, there were like-minded and noble people risking all to help, where is the help today?

This video is trying to give people a message. Dancing is distracting people from the real world issues like the that be going on. A gun can get treated more carefully than a person death.

This music video has been interpreted many different times in many different ways. It is notably interesting to try and make sense of the subliminal messages although there are many.