Why Can’t We Decide On Gun Laws?

Home Why Can’t We Decide On Gun Laws? 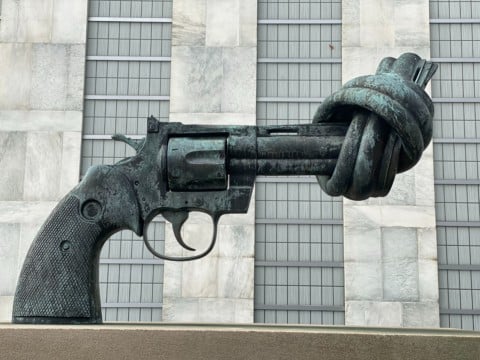 America is always going back and forth on whether or not gun laws should be come more strict. There are many people who support guns, like members the NRA, but there are also many people who are strongly opposed to guns. There are also people who don’t know how to feel. Some Americans gain a strong sense of security from having a gun, while others believe that guns can only do damage. There is so much fighting over whether or not people can have guns and where they can have them. There is also conflict on which guns should be legal and which should be illegal. All of these arguments are fueled in light of tragic events like the Sandy Hook school shooting.

In 2019, Pete Willams from NBC News wrote an article that explains some of this conflict in the context of the law. He brings up cases like Washington, D.C. v. Heller and McDonald v. Chicago to talk about courts hesitance to even bring forth the topic of guns rights. The Williams’ article “Gun control advocates nervous as SupremeCourt takes up first 2nd Amendment case in a decade“, talks about a court case from New York in which a group from the New Your State and Pistol Association Inc. asked that they be allowed to take unloaded guns across state lines for the purpose of gun competitions. The court ruled in favor of the City of New York saying, “The city has never abandoned its view that the right protected by the Second Amendment is a homebound right”.

While this particular example is a win for advocates of gun control, these types of conflicts happen all of the time. This case was an exception in its ruling in favor of gun control. Typically, the Second Amendment protects gun rights. For example, in Washington, D.C. v. Heller, the court ruled that the Second Amendment protects the right to keep handguns as self-defense. McDonald v. Chicago then made it so that the Washington, D.C. v. Heller court ruling was made nationwide. There will be debates over guns rights for a long time because things are constantly changing. What the constitution laid out will always be reinterpreted and understood in many ways. There will likely never be a solidified decision on gun rights in the United States simply because there are so many different views on the topic.

Dear Audrey :
I am amazed by your post, “Why Can’t We Decide On Gun Laws?,” because as I read I was really interested in the topic seeing that many people have different perspectives and ways of thinking about gun control or possession of guns. The way you expressed the topic really made me think about even what do I think about it and what is my perspective about it.
One sentence you wrote that stands out for me is: “Some Americans gain a strong sense of security from having a gun, while others believe that guns can only do damage. There is so much fighting over whether or not people can have guns and where they can have them. ” I think this is important because it is expected for the topic to be both sided but also giving point and key material for both sides.
Thanks for your writing. I look forward to seeing what you write next because your text made me realize that having an opinion and thoughts is not bad and can be of much help. Also, I liked the way you were able to give from both sides the pros and cons and made me think about what will I agree with.
Fatima Esparza

This is an interesting topic Audrey, but one that needs to be talked about. I’m responding to your point of how the courts hesitate to even mention gun rights, not because they don’t care, but because they are trying to offend/aggravate as few people as possible. By staying away from the topic they avoid offending/aggravating people. Gun control is also treated as a flair-up topic, it’s only talked about when something happens and when something new comes up it is no longer talked about. I think it is important that more people comment on this to provide a greater reach of information and I’m interested to see wht else you have to say.

Hi Audrey, great post.
I like this post because, without taking a stance, it tackles the seemingly simple question of why there is such disagreement on this topic. Obviously one could say that there are people that want their guns and people that want to ban guns and people in the middle, but of course its not that simple. You are definitely correct to say that “There will likely never be a solidified decision on gun rights in the United States.” The people in my life are very weary of the government, and feel they need something to protect themselves from the government, and naturally Id have to agree. But the debate itself is very interesting. Thanks for reading!