Why Black Holes Aren’t as Scary as People Think

Home Why Black Holes Aren’t as Scary as People Think 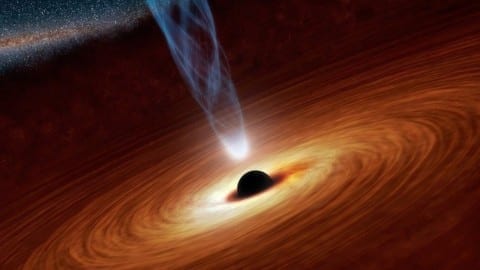 Ever since they were first hypothesized, black holes have been a subject of fascination and occasionally horror in movies, the media, and books. Over the years black holes have taken up a fearsome reputation, as people portrayed them repeatedly as monsters of the cosmos. Black holes have been said to devour stars, crush planets, and even be portals to new dimensions. However, despite all the fuss about black holes in pop culture, they are actually not quite as scary as people think. Sure, If you got too close to one, you would be killed, but the same could be said for any star. The earth has almost no chance of ever encountering a black hole, and even if we did, it would have to come incredibly close to cause any real damage.

One thing about black holes many people don’t realize is that they are actually solid objects. Unfortunately, it is impossible to ever see what a black hole would look like, because they are so dense that light cannot escape their gravity, hence the name “black hole”. Cosmos provides a fantastic illustration of this extreme density, showing that for earth to become a black hole, all of its mass would be confined within a nine millimeter radius. For the sun to become a black hole, its radius would have to decrease to three kilometers, almost a quarter-millionth of its current size. However, there is no need to fear the sun becoming a black hole, despite what the movies might show. Black holes only form after the deaths of giant stars, and the sun is nowhere close to that size. When our sun does die, it will become a red giant, and then a white dwarf, but it has no chance of becoming a black hole.

Let’s say the sun did become a black today, instantaneously. The effects would be less cataclysmic than most people assume. For the first eight minutes (the time it takes for light to reach us from the sun), absolutely nothing would change. Then, once the last remnant of the sun’s light trickled through, the earth would go dark. However, that would be the only effect. National Geographic says that “Earth would be dark and cold, but our orbit around the sun wouldn’t change.” The Sun, though now no longer emitting light, would still have the same mass, so we would stay in the same orbit. Though the lack of a light and heat source would certainly lead to our extinction, we would not be violently sucked into the black hole and crushed like most people imagine.

Despite black holes being one of the most well known cosmic phenomenons, we actually know very little about them. Because they allow nothing, not even light, to escape their gravity, scientists have no way of observing them directly. The only reason we know they exist is because we have observed their effects on things around them. Also, no one is entirely really sure what exists inside a black hole. If our current understanding of gravity is correct, then inside black holes a singularity would occur. A singularity is a point of infinite mass and no volume. If singularities do exist, they likely bend the laws of physics around them, warping both time and space. However, National Geographic says that “Singularities likely don’t really exist but point to a mathematical hole in our understanding of gravity.” It could be that singularities are very real, but we just don’t have the ability to understand them, but the more likely explanation is that there is an error in the way we view gravity.

Black holes are one of the most fascinating occurences in the universe, but they are nothing to be afraid of. A rogue black hole is not going to suddenly appear and destroy the earth, nor is the sun going to become a black hole. There is so much we don’t know about black holes, and they should be studied, not feared.

Dear Logan,
I am intrigued by your post because you really changed my perspective about black holes. Every time I thought about black holes, I would think ‘danger! Danger!’. However, it really exposed me to the nature and truth about black holes. But I also became really fascinated about black holes.
One thing you said that stands out for me is: “For the sun to become a black hole, its radius would have to decrease to three kilometers, almost a quarter-millionth of its current size.” I think this is interesting because it really illustrates how unlikely it is for our sun to become a black hole when it dies. It really highlights how black holes are rare occurrences.
Thanks for your project. I look forward to seeing what you write next because it seems like you have a lot of knowledge regarding space, which I am very interested in.You also seem to like to write about the truth about well known rumors, which I love finding out.

I love this post Logan! I am super interested in space and what we don’t understand about it. I never realized black holes were so relatively harmless. I also didn’t realize how little we really know about them. I always see the same type of images about what a black hole looks like but these depictions could be completely wrong. Truthfully I don’t think our human species will ever grow to understand black holes. This portion of space will remain a mystery forever. It amazes me that we have all of these fundamental understandings about math and physics and black holes could single handedly prove many of this wrong. I love these types of mysteries. Thanks for the post and insight. This website might be interesting for you.
https://list25.com/25-crazy-facts-black-holes/

Hello there Logan, I found your post very fascinating. What was really interesting was your theoretical idea of the sun turning into the black hole, although there may be an issue with the sun turning into a black hole. From this link, http://hubblesite.org/reference_desk/faq/answer.php.id=57&cat=exotic, “ Four billion years from now when the Sun runs out of the available nuclear fuel in its core, our Sun will die a quiet death.” This is because the mass of the sun isn’t enough to become a black hole, and if it did have a slight chance to become a black hole, it would take some time. Also, when you said “The earth has almost no chance of ever encountering a black hole, and even if we did, it would have to come incredibly close to cause any real damage.” I thought that was interesting because from this link, https://www.theguardian.com/science/2017/sep/04/supermassive-black-hole-discovered-near-heart-of-the-milky-way, scientists have found that “An enormous black hole one hundred thousand times more massive than the sun has been found hiding in a toxic gas cloud wafting around near the heart of the Milky Way.” And “the Milky Way” they’re talking about is the Milky way we are in, so we will be encountering a massive black hole eventually. It may take many years. How can you be sure that the sun won’t burn out eventually? It’s hard to make any claim on something where anything can happen. I am interested to see what you do next with your paper. Bye.

Really cool topic. The physics mysteries surrounding the nature of black holes are so interesting. They’re definitely one of the biggest conundrums in space, and have probably gotten their exposure from their portrayal in movies and television like you said. I’d love for us to be able to know more, but it seems silly to hope for any quick development.

Here’s an article I found talking about some of the scientific uses for black holes:
https://gizmodo.com/mind-blowing-new-theory-connects-black-holes-dark-matt-1793710627

Wow, I was really fascinated with your topic about black holes. I did not know that black holes are formed from giant starts that died so I definitely learned a lot today from this… good job.