Why are we divided?

Home Why are we divided? 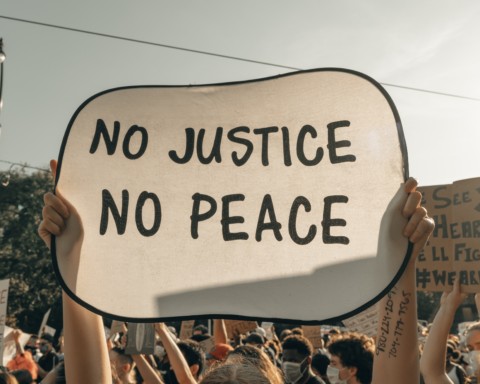 We live in a world, with Americans of different ethnicity, race, culture, etc. The past year, people and society and racial inequality has been the main spotlight. After many Black Americans died by police, some communities feel as if do not belong. Aren’t the American people supposed to be united as one? Across the world, groups of people got together to march down the street for equality.

Criminal justice, housing, education, wealth, health, have astonishing rates that show inequality. This gives disadvantages to people of color due to inequalities rooted in systemic racism, as said in the article “Two America”. You don’t even have to look at the rates, you see on social media, in society, as they say, “racial profiling”. Have you ever racially profiled someone?” Has anyone ever racially profiled you? That’s the problem in this generation, there’s no equality or nonjudgement.

Spread awareness and spread kindness, no everyone is perfect but everyone should be treated with dignity.

Hi Selena,
This post really caught my attention because this is a huge issue that America faces today. I agree with the topics and the several questions you brought up, such as, “Aren’t the American people supposed to be united as one? “. This question is a huge one that we still haven’t found the answer to. We all come from different backgrounds and situations, but it seems that the system has a bias against people of color. We’re supposed to be a country that invites all people to come together and be united, but it’s the complete opposite for a majority of us.

Thank you for taking your time and writing this article, it gives insight into a bigger problem that affects us all.

Dear Selena,
I am intrigued by your post since the topic you chose could be taken in different ways. The title and photo match very well.
One thing you said that stands out for me is: “Aren’t the American people supposed to be united as one?” I think this is important because history has proven otherwise. It seems as if the country isn’t stable.
Your post reminds me of our current situation like you have stated. Race is something that should be a priority of everyone even if you are not a minority. It is really sad that some people are not willing to help the problem.
Thanks for your project. I look forward to seeing what you write next because you are able to show interest into your research. I hope you could make a follow up to this post in the future.

Dear Selena :
I am moved by your post, “Why are we divided?,” because this post
One sentence you wrote that stands out for me is: “Criminal justice, housing, education, wealth, health, have astonishing rates that show inequality.” I think this is interesting because America is supposed to be the country of the free and this inequality says otherwise.

Another sentence that I saw was: “After many Black Americans died by police, some communities feel as if do not belong.” This stood out for me because the people that are protecting citizens should not shoot innocent citizens.

Thanks for your writing. I look forward to seeing what you write next because…

Dear Selena,
Your post is really intriguing because of how much it relates to people around the world. Your post reminds me of many books I’ve read in the past where they talk about race and culture

Your post can have an impact on a lot of people, I really like the way you show what people do.

Your post really caught my attention because it is related to the terms of today when many families have been the target of abuse and racism.

I agree with what you say, “No are the American people supposed to be united as one?” This means that the United States is being torn apart little by little by the citizens and more by the whites who are rich who believe that they are everything for all the amount of money they have.

According to your post, “Criminal justice, housing, education, wealth, health all have staggering rates of inequality.” I agree with you, Selena when you say that “this creates disadvantages for people of color due to inequalities” because people of color do not really have all the advice to be able to do themselves or have a better future for their relatives. I think that in truth the United States is not this way, but the world is dividing for reasons of money and racism.

In your writing, Selena, you ask: “Have you ever profiled someone for racial reasons?”

My answer: Do you mean like looking for conflict and information about that person? Really? Nope!

You also ask: “Has anyone ever racially profiled you?”

My answer: Do you mean, for example, someone being racist toward me? Things like this never come to my mind, so no.

You also write, “That’s the problem in this generation, there is no equality or lack of judgment.” I believe that you really mean everyone. If we are the same and that some have many bad thoughts and that others are very good to be in this corrupt world.