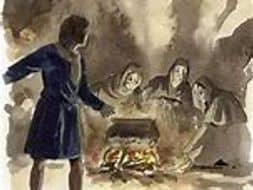 I picked this passage because is more intriguing because the Macbeth story revolves around the witches.The witches are meaningful to the story because they are the catalyst that causes  Macbeth to have so many conflicts.

In this monologue the speaker is the third witch.She is speaking to the first and second witches.All three witches are on stage and the witches are listening  to each other.They are outside and there’s thunder and rain.The witches circle a cauldron.The witches are a coven.The scene is happening at night time.

In this scene Macbeth approaches the witches to learn how to stay as king forever.Macbeth is nervous because at this point in the story he has already killed Duncan and banquo, but Fleance is still alive.

The central conflict is that Macbeth wanted to be king but he did not want to be the killer of Duncan.Now that he killed Duncan he feels guilty and scared he was also panicking.Macbeth also sees things that aren’t there like Banquo and a knife.He also goes back to the witches to ask them how can he stay king forever.

The third witch is not a dynamic character because nothing happens that changes her personality.Macbeth is the character that keeps changing his personality throughout the story.The fundamental needs of the third witch are all the items she needs is the cauldron.

So what’s basically happening is she’s putting a lot of items in a big bowl to make a witch spell.