Home Why are people Moving in and out? 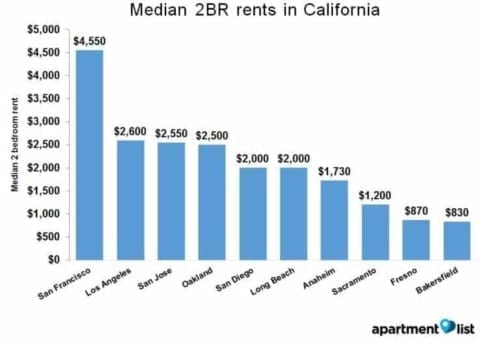 Why are people that have lived in Oakland all their lives suddenly moving out? Why are other people suddenly moving into Oakland? Based on the research, people are moving in and out of Oakland because of high rent, new job opportunities, and evictions. This is true because the rent has grown a ton over the years, all the new job opportunities there are, and many families have been evicted from their homes.

To start, people are moving out of Oakland because of high rent. This is an interview with  an Oakland mother of three, Maria Santillan; she was asked “Have you considered moving out of Oakland, and why?”. She responded,” Yep, because of rent and safety”(Santillan). She was then asked how high was her rent for her 2 bedroom home,”I have to pay, $1,250 for the rent”(Santillan). These quotes are describing the reason why she considered moving out of Oakland. She considered it because she has to pay $1,250 for rent. This proves that people are moving out of Oakland because she’s considered moving out since she can’t afford to live there. Furthermore, here is some research about rents for different homes, and this one, is quite  surprising. In Hotpads, it shows all the available housing anywhere. In this case, this price is a studio near Fruitvale, Oakland; It shows,”$1,533 studio 1 bath”(Hotpads). This evidence shows how much Oakland residents have to pay for a little studio, which is $1,533, which is way too high for a studio. In the interview with Maria Santillan, her rent was $1,250 for her 2 bedroom house. This studio is a lot more money, which isn’t fair. This is proving that rent is causing people to move out, because rents like this are happening. To be able to live in Oakland, a person now has to pay over $1,500, but that’s just so that they can stay here. There are families that need money for personal needs, besides rent, but most landlords don’t see that, and just make the rent higher. In conclusion, high rent is making people move out because of high rents, and the rent is high even for not so large homes.

People are moving into Oakland though because of job openings. To begin, Andrew Pablo, an OUSD teacher that has recently moved here, was interviewed. He was asked ”Why did you choose to move here?”. He responded,”I got a job here”(Pablo). This evidence is showing the reason why this teacher moved here, because of his job. This shows that there are other people that have moved to Oakland because of job opportunities there are, like to be a teacher. Not only in Oakland, but in San Francisco as well. There are more than plenty of job openings in San Francisco, like in tech, and some people may not afford to live there, so they live in Oakland and work in San Francisco. Furthermore, this research on google shows just how many more jobs openings there are now, and in 2015, in Oakland. If someone were to google “how many job openings are there in Oakland now?”, they’d get,”About 165,000,000 results”(Google). If someone were to google “how many job openings were there in 2015 at Oakland?” they’d only get,”About 76,200,000 results”(Google). This evidence is explaining how much the results for jobs has increased now. In 2015, there was about 76,000. In 2018, there’s about 165,000,000 results, which is 164,924,000 more than there was in 2015. This proves that people are moving into Oakland because job openings has increased since 2015, and surely, it’ll keep on increasing. This is a credible source because the amount of results / sources that show up can’t lie. In conclusion, people are moving in because people are getting jobs in Oakland, and job openings, in Oakland, has increased since 2015.

Evictions are forcing people to move out of Oakland because evictions rates have  gotten higher in Oakland. In an interview with an Oakland resident, Francisco Santillan, he discussed an eviction. He stated, ” Oh yeah, this one big family was evicted saying that they had 24 hours to pack up and leave, or the sheriff was gonna come and kick them out, it was about… 8, 10 people”(Santillan). This evidence is showing how a family of 8-10 people were forced out of their homes, in Oakland. This proves that people are forced out of Oakland because in 24 hours, they can’t find a home, and not with a family that big. It would be very difficult for them to find a home in such short time, and especially because they’ll have to pack all of their belongings and tell their family what the changes are. It isn’t easy to find a home, and not now, atleast. Finally, in the article,”It’s a fact: The Bay Area rental market has softened” by Richard Scheinin, it talks about the eviction rates that happened from 2015 through 2016. The article also explains the eviction rates in Oakland. It describes,” According to additional records from the Housing and Community Development Department in Oakland, there were around 12,050 eviction termination notices served in Oakland from 1/1/2015 through 2/29/2016”(Richard Scheinin). This article is describing the eviction rates that have happened from 2015 through 2016, which is 12,050 evictions. This proves that people are moving out of Oakland because this statistic shows that 12,050 families were forced out of their homes in Oakland! They may not have moved out of Oakland and just moved to different homes, but it’s pretty difficult to find a home because of the high rent and newcomers buying homes. So most likely, they moved out of the city. In conclusion, evictions are forcing people out of their homes because they’re being forced out of their homes on such short notice, and the eviction rates have increased since 2015.

In conclusion, people are moving in and out of Oakland because of high rent, new job opportunities, and evictions. I hope everyone understands the reasons to why there are people moving out of their home, Oakland, and why people are moving in, taking away people’s homes.

Pablo, Andrew. “Oakland Teacher Interview.” 12 Dec. 2018. We discussed about why he moved into Oakland. He has recently moved into Oakland because of a job he got, which was being a teacher to support youth (in their homework , projects, etc.), in the school, Life Academy.

Mercury News, Richard Scheinin, 3 Jan. 2017, 11:48 pm, www.mercurynews.com/2017/01/03/its-a-fact-the-bay-area-rental-market-has-softened/. In this article, they discuss about rent in the Bay area, and do discuss about Oakland. He is a credible source because during his 25-plus years based at The Mercury News, his work has been submitted for Pulitzer Prizes for reporting on religion, classical music and jazz.

Santillan, Francisco. “Oakland Mexican Resident.” 12 Dec. 2018. We discussed about whether or not they knew anyone that was evicted from their home. He is trustworthy because he is a Oakland residents, and knows many people in Oakland.

Santillan, Maria. “Oakland Mother Interview.” 13 Dec. 2018. We discussed about rent and the reasons as to why the rent is so high, specifically in Oakland. She is a Oakland resident and always has been since she was a child (5-6 years old), and has to pay her own rent.

Kassandra,
I really appreciate your post. I live in Los Angeles, and we have the same problem with high rents and lack of affordable housing. The topic you chose is very relevant and deserves more awareness and action. Have you thought of linking your research on evictions with research on rental increases? In Los Angeles, I believe we have a similar problem with evictions. Landlords keep raising the rent so that, even if a family could at one time afford the rent, they no longer can afford it and they are evicted. I would also be curious to know what the statistics on homelessness are – I think these statistics might make your argument stronger.

Lovely to read your post! I would love to hear your thoughts on the issues I’ve raised!

Dear Ali,
Thank you so much for the feedback! I was researching statistics on homelessness in Los Angeles, and I stumbled upon, https://www.latimes.com/local/lanow/la-me-homeless-how-we-got-here-20180201-story.html which explained,” The number of those living in the streets and shelters of the city of L.A. and most of the county surged 75% — to roughly 55,000 from about 32,000 — in the last six years. (Including Glendale, Pasadena and Long Beach, which conduct their own homeless counts, the total is nearly 58,000.)” And I thought it was pretty interesting. But for homelessness in Oakland, I found that,” Oakland’s homeless population is conservatively estimated at 2,761. Over 300 of the homeless people counted last year during a county census were children, and 68 percent of the city’s homeless are Black. Most of the homeless have chronic health problems. Some are employed but can no longer afford the cost of housing in the Bay Area” from https://www.eastbayexpress.com/SevenDays/archives/2018/01/21/united-nations-expert-describes-oakland-and-californias-homeless-crisis-as-cruel. I can tell homelessness is growing in my city because I see tents everywhere in the Bay. Do you or anyone you know struggle with homelessness, or struggle having a home? I look forward to hearing your response!
Sincerely,
Kassandra

Dear Kassandra,
You did a great job explaining One sentence you wrote that stood out to me is,”This proves that people are moving out of Oakland because she’s considered moving out since she can’t afford to live there.” This sentence stood out to me because it shows the perspective on what Maria Santillan thinks and it shows a mother’s struggle especially with 3 kids. “There are families that need money for personal needs, besides rent, but most landlords don’t see that, and just make the rent higher.” I also really like this quote because it shows how families struggles with not only rent but by providing what they need for their family.
Sincerely, Christy V

Dear Christy,
Thank you so much for reading and commenting on my blog. A question I have for you is If this rent situation is affecting you or your family? I look forward to hearing back!
Sincerely, Kassandra

Dear Diego,
Thank you for reading my blog and leaving a comment! A question I have for you is what part if my concluding paragraph made you think more?
Sincerely, Kassandra