Whose Rights Are Reproductive Rights?

Home Whose Rights Are Reproductive Rights? 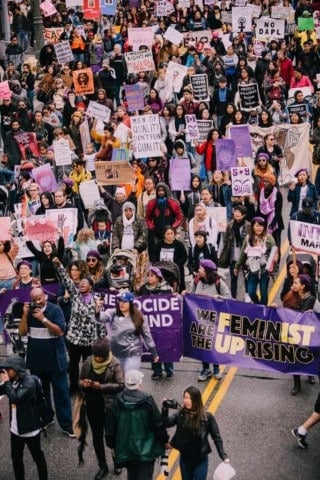 The multi-decade long debate about reproductive rights has been in the political atmosphere as well as a social and religious environments for as long as many people can remember. The used- to-be black and white topic has sparked the interest of almost everyone who’s paying attention to different laws and bills passed or trying to get passed in America. But is it for the legal system to say what women can do with their bodies, including their reproductive systems? Or, is it the right of the woman to choose how they want to care for their bodies as well as reproduce?

As I discussed in a previous post, there are two prominent stances on this current issue, those who want to make reproductive rights a public and political issue, and those who believe these rights should be handled privately and personally. The common thread between these two different sides is how there seems to be little compromise wanting to be made. Whether it has to do with abortion, sexual abuse, or birth control, there seems to be a clash at all times of private and public communication. Through American court systems, pregnancy and conversation about it has become an increasingly non-physical manner when in fact it’s entirely physical. Through the Yale Journal of Law and Feminism, there is a quote that perfectly sums up women’s privacy for their bodies legally, “the right of privacy, as framed by the courts, has failed to reflect the physical reality of women’s lives. Moreover, privacy’s balancing test has led to an alarming trend in American constitutional and common law toward permitting the state to intercede on behalf of its interest in a fetus, thus casting a woman as an adversary to her womb”. It seems as though privacy in the courts goes right over their heads. Through this, there has been a chain reaction of forgetting what privacy’s women still have in accordance with their bodies.

Through many thorough and controversial decisions made by both women and the public, whether it be the government or other influences, there still seems to be complete tension around the subject, which shows how little progress has been made. There have been great strides to keep reproductive rights as part of women’s rights, but at any moment there may be changes or differences coming each day. One solution that I found very important, that all sides of this debate should look at, is from a Huffington Post article titled Why Both Sides of the Abortion Debate Are Right, And Wrong by Teresa McLeod. It says, “try picturing it like a triangle. Instead of pushing and pulling along the base, both sides direct their energy towards creating a higher level solution at the top the pinnacle. A solution that doesn’t dilute or compromise the truth of either side, but is in fact built upon it. In this case, It’s a yet-to-be-discovered-solution, but it’s a solution we can’t find until we open our minds enough to consider new possibilities”. I believe this type of mindset will help all people find a solution to this ever present conversation, and hopefully soon.

Ronnie, there are so many things that I agree with from your post. I liked how you said the issue of reproductive rights use to be “black and white”. It also frustrated me that there are two sides to this argument but neither side cares to make much progress with this issue. You may find this article helpful with future research: http://family.findlaw.com/reproductive-rights/what-are-reproductive-rights-.html.

Hi Ronnie!
This post is very well written and you bring up a lot of fascinating points. As a girl, the debate around reproductive rights can be rather frustrating, and I think you did an excellent job at presenting those frustrations here. I found the quote from the Yale Journal of Law and Feminism to be especially helpful/ relatable. I thought how it stated “…thus casting a woman as an adversary to her womb.” really helped capture a lot of the controversy around the debate. Great writing! Keep it Up!