Who is looking out for the homeless?

Home Who is looking out for the homeless? 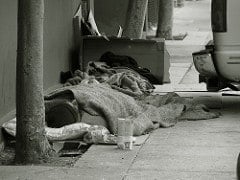 As it gets colder in Salt Lake City the homeless will begin to face a crisis unlike any other. Because of these freezing temperatures shelters and The Road Home will become packed to full capacity leaving many outside in the cold. Many families will be seeking shelter and a home for the next 120 days just to stay alive, which makes me wonder, is there anyone working on a long term plan to solve homelessness?

Salt Lake has had an increase in the homeless population over recent years and it seems like the more of them there are, the harder it is to help and provide for them. After doing research I found that recently Salt lake Mayor Ralph Becker and Police Chief Mike Brown are making an effort to deal with the homeless crisis downtown and in doing this they are using a program called HOST. HOST, that’s homeless outreach service team, is a program made to help the homeless restore their lives. Chief Brown says that the way he will make this happen is mainly by investing more people in the issue. Short term, he will have many officers permanently assigned to the area so that they can become familiar with the community and how to fix it. At any given time he will have anywhere between 6 and 12 narcotics officers and bike patrols on shift in effort to keep the scene safe and provide assistance.

Long term, Brown plans to go to the root of the problem enlist 8 new civilian case workers in the police department to advise the homeless on an intimate level. In doing so, they will understand them and help them with a solution whether that is in a job, housing, or mental illness. To go along with personal advice, police have created a non-emergency hotline. By calling 801-799-DNTN a bike officer can pick up the call and go directly to the scene. Becker and Brown are a few of the first to really want to help and create a longterm solution for the homeless and for that reason alone the Salt Lake community is already recovering from homelessness.

I like that Chief Brown is invested in this cause, but I’m a little concerned that his main way to “end homelessness” is to place narcotics officers and patrols in the area. You say they are there to “provide assistance” to the homeless people, but I’m interested to know if they do more than simply make drug busts.
Way to be interested in this cause, though- interesting article. It’s clear that you care about this issue.

Homelessness is a massive problem in Salt Lake City and it’s great to see that we are beginning to take steps toward solving the epidemic. Homeless people are human and they deserve a shot at regaining their life just like anybody else.