Who I Really Am – Shadow Box

Home Who I Really Am – Shadow Box 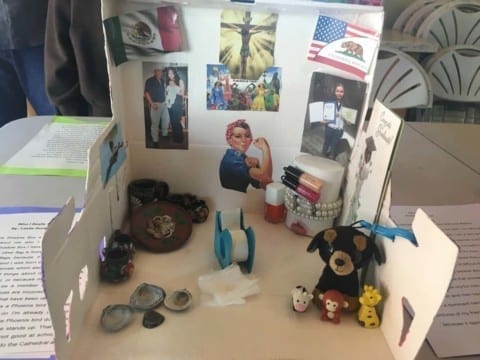 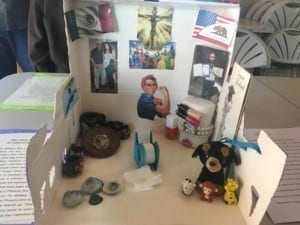 Who I Really Am
I have done this Shadow Box where I show the counter narrative the truth about me who I actually am and what represents me. In my Shadow Box I have added two flags one is the Mexican flag and the other flag is from the U.S.A/California. I have added those two flags because it represents how my parents come from Mexico and I was born in Oakland, California which my gender identity is female which also makes me Latina. Many people assume a lot of things about me like; I’m weak, Latino/a are not good at school, or because my race is Latina, have Mexican blood I have to be a member of the Catholic religion, but those dominant narratives are incorrect. I’m a strong female I have pass by a lot of stuff that have been really hard for me to deal with. I represent myself as a Phoenix bird because I have been really bad/down but later on I’m already up, good enough to keep being in this world as the Phoenix bird does she reborns again and with her own ashes she stands up. That’s not true, about when people say “Latinos are not good at school.” I know it’s not true because twice I have gone to the Cathedral and there was only Latinos we were more than 50 students and I earned one medal and two diplomas. When people look at me, they see me really tall “you are tall as a giraffe” and tell me that I have to marry a Black guy because I’m tall. In my Shadow Box I have a picture where I’m with both parents, I decided to add that picture on my box because as you can see both parents are tall and both are Mexicans from the same place. So, that means that I can also find someone that is Latino/Mexican and not a Black man. I have chosen to include a picture of my religion “Mi Religion Es Yoruba” because as I said before just because my family is Mexican doesnt means that I have to be on the Catholic religion. I love my religion and I’m not shy to show the world what I believe on. But also I added a picture where there is God (Jesus) because in every religion there has to be God first and as my religion says without God’s permission we cannot do anything, God its first. I see myself as a vain person wich that’s my gender expression. I like to always look good even though for the simplest thing I like to look nice. I’m always wearing earrings, I like to wear sometimes necklaces, paint my nails, at least one bracelet, and some lipgloss, and I love bags . That’s why I have added on the corner of the box two lipgloss, bracelets, a nail polish and a little plastic bag. Many people assume that I’m that one girl that loves makeup, clothes, going shopping a lot but no, I’m that girl that loves animals, but I have more love to dogs. When I was younger I used to say that I would graduate and then I would be a veterinarian for I could help animals, but now I have change my idea. When I grow up I would like to graduate that’s why I have added on my box a picture where it says “Congrats Graduate” because I’m going to graduate and then I would like to work on a hospital helping people. As I said before, I have pass by a lot and a lot means I have been on the hospital a lot. I have gotten surgery two times, I broke my nose, and once I was going to get surgery again but I didn’t but I did stay on the hospital because they did something else. Everytime I go to the hospital I see people (parents) getting out of the hospital in wheelchairs with their babies and it makes me so happy to see them also a lot that I have been on the hospital not only one person or two go and see how I am more than two people go and see me and I’m really happy about that, that I would like to work on a hospital and help people as the same way other doctors, nurses have help me. So, the last two items I have added on my Shadow Box is shells and the other one are cups with a plate (comal) something like that with rice and beans. I added the shells because I like going to the beach with my family, there is one of the places I feel calm. And lastly I added food because a dominant narrative that I have heard a lot is that young females/teenagers we don’t know how to cook. But the counter narrative is that I do know how to cook with the help of my mom she have shown me how to cook her Mexican food which it´s really good. Also a lot of Mexicans always have to have at least some beans with rice to eat and mostly a lot of people have their ollas de barro.

Dear Leslie,
I am shocked to see your shadow box because I can really see the identities you are talking about based on the objects and pictures you used. I think your box really is outstanding because you really show that you care about your religion and you care about family. Something that I was thinking about was why did you choose a background color to be white does that have any meaning in your shadow box? One part of your artwork that stood out to me was the tape you have and I predict you used that since you get sick very often. Another part that stood out to me was the picture of my godparents you used because it shows they are really important to you and they are a part of your identity. Thank you for your writing. I look forward to seeing what you write next, because you have very strong ideas and you are really creative. I think you did really good showing your identities with the objects you chose good job Lala.

Dear Leslie,
I really enjoyed reading your artist statement I feel like it made a really big impact on me. The things that you included in your shadow box were really nice like the seashells and the makeup even the little artifacts were beautiful. Good job on your shadow box! It was truly beautiful.

Hey Leslie,
Thanks for sharing such a cool shadow box. From reading this I really learned a lot of new things about you for example that you really like bags and painting your nails. I didn’t notice that you are always wearing earrings. I hope that you share more with advisory so we can be able to know you better.

Thank you for sharing your work. My name is Emmy and I am a student at Fremont High School.
Something I liked about your work was that you explained everything and was straight forward.
Something I have a question about is how did you feel while they made the dominant narratives about you?Please feel free to comment on my work in the future. The address of my student blog is http://emmyffsh2021.edublogs.org/2017/11/09/assignment-5/.
Thank You!

Hello Leslie,
My name is Long and I attend Fremont High School where I did the same shadow box project. I really liked that you put both flags that represent you which are the American flag and the Mexico flag. For my shadow box I had the same idea but I am using the American flag and the Vietnam flag. A question I have about your shadow box is that out of all the stuffed animals that you added to your shadow box which one would you say is your favorite? Overall I think that you did really great on your shadow box due to the fact you added artifacts to show what you truly love and the way you set it up was very lovely.

Hello Leslie,
My name is Luz Morales I attend to Fremont High and I really like your shadow box because I can relate to your story as a latina I know what it feels like to be marginalized in a box full of stereotypical beliefs. One of the things that I really liked about this piece was the part where you talked about your religion and breaking the gender stereotypes is really empowering. Another thing I really liked about this shadowbox was the way you connected the phoenix bird to you and the way you gave some background about why you identify as a phoenix bird. To further your thinking here are some questions I would like to ask, Where do you think stereotypes come from? when you hear the words Prejudice and stereotype what is the first thing that comes to your mind? Why do think people stereotype others?

Hello Luz,
First of all thanks for reading my post, hopefully you enjoy it. Being latina is really hard even though some people don’t believe it. Answering your questions, I believe that maybe stereotypes might come from older people for example parents. Parents teach their child’s and they pass it through other people. The way I believe that it might be parents is because we learn from our parents, by them saying comments and they put words/ believes in our mind and we listen them. Sometimes when I heard the word stereotypes in my head it comes sadness because it’s sad to heard comments from other people judging people that you don’t even know, and from the people who are receiving those comments start to feel bad about their own selves. I believe that people start to stereotype others because they might not have something else to do and just bother people. Lastly, once again thanks for reading my post and leaving a comment. Hopefully one day I might have a chance to also read something about yourselves or what do you think about what is happening around the world.
Sincerely, Leslie

Leslie, I really enjoyed reading about what others think of you contrasting with who you know you are. It was interesting for me to hear about your experience as a Latina and how it has shaped you. I also enjoyed reading about stereotypes that people inherently place on you, and how you have overcome these stereotypes in your own life. I found it inspiring when you said that “Many people assume a lot of things about me like; I’m weak, Latino/a are not good at school, or because my race is Latina, have Mexican blood I have to be a member of the Catholic religion, but those dominant narratives are incorrect. I’m a strong female”. This statement demonstrates your high sense of self worth and helps me to gain a better understanding of how strong you really are. Thank you for letting me read, I hope to see more from you in the future. -Reilly

Hey Leslie,
I really liked your shadow box. I like the wide variety of objects. From stuffed animals, to sea shells, and tape (if that is tape, its hard to tell). I especially love the Rosie the Riveter.