When I wanted to quit what made me keep going?

Home When I wanted to quit what made me keep going? 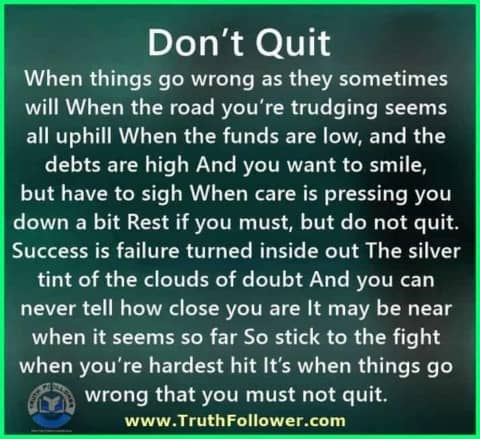 Sometimes quitting could get in the best of you.  I have been there so many times. I’m a 15-year-old student athlete who plays the sport of basketball.  I’ve had injuries and wanted to quit, but I just can’t. Why quit if you can just build yourself back up again? Why quit if you could come back stronger? Why quit if you have people that look up to you? Why quit if this is something you LOVEEE!!!!!!!! Never give up on your dreams. You will come across people that will try to knock you off your feet but never fall. If you fall get up and keep going. Never look back, you can’t move forward in life if you’re stuck in the past. Always have faith and hope I know you can do it. Keep going I believe in you  -Nataliya Douglas

Before you can accomplish anything great, you need to figure out why you want to achieve it. What drives you? Ask yourself that question. It doesn’t matter if you’ve failed at something in your life. I am the ultimate failure because I have failed at everything. But I also refused to give up. However, I’m not some exception to the rule.The truth is that the most famous people in the world have failed the most times. But they didn’t stop. They didn’t give up. They might have paused for a very brief period, but they kept going. Yet, they all had something that kept them moving forward. They all developed something in their hearts and their minds that pushed and pulled them towards their goals. What’re your reasons for wanting to achieve your goals? The most important thing about goal setting that you must understand is that if you don’t set your goals the right way, you’ll surely fail. The truth is that a large majority of people set their goals the wrong way and they often give up. This is especially true for people that attempt to set goals on New Year’s Eve. They almost always fail.

Athletes that wanted to quit

In sports, injuries are inevitable. Even when athletes are in peak physical form and specifically train to stay fit and mobile, a single errant step, awkward landing, or violent collision can bend joints and limbs in ways they aren’t meant to move.But with the way technology, medical care, and advancements in surgery have developed, many of those breaks, sprains, and tears aren’t the career-enders that athletes fear. With the right recovery and a lot of mental toughness, athletes can return better, faster, and stronger.