When does a person become an adult?

Home When does a person become an adult? 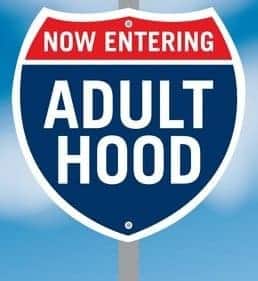 Basically, there isn’t a whole lot of reasoning behind the ages put into place in America allowing certain privileges and taking away others. The legal age of adulthood is 18, yet the drinking age is 21, and you can’t rent a car until 25. These various ages are mainly results of different lobbying groups over time. The adult age of 18 came around when the Vietnam War protests were going on. The legal voting age was lowered due to the national unrest, but so was the age for being a legal adult. Young people felt that if they were old enough to to be sent off to war they were old enough to vote. The 26th amendment was passed, allowing citizens to vote at the age of 18.

Is 18 the right age? At 18 young people are expected to quickly gain a ton of independence, although there is a whole lot that they may still not know. For kids with subpar upbringings this can be an especially hard leap, as they may not have the same mentoring that a child with a more stable home could have. Kids raised in foster care systems for example are expected to care for themselves upon turning 18, and can no longer receive aid from the state. There is a time in each person’s life where they have to become self sufficient, but there is a range of ages for when a person will be prepared for this transition. High schools teach students many things, but often times real world subjects such as paying taxes, applying for jobs, and managing a budget are looked over, leaving students to either learn on their own or rely on their parents to continue to help them.

Another major consideration is the brain development of a young person. Today we know that the brain isn’t finished developing at 18, and that some parts aren’t finished developing until around 25. The areas of the brain involved with rational and long term thinking are still forming in teens, differing them from older adults. This relatively new information makes it hard to decide when the legal age of adulthood should lie, but it seems as if rental car companies are doing something right. So the question lies – should the age of becoming a legal adult change?

dear Ed, i agree and enjoy a lot of what you said, like when you asked if 18 was the right age and i think about that quite often as i am becoming of that age . it is so crazy to think our brains aren’t fully developed yet..i mean for some thirty year old’s its like their brains will never develop, if you know what i mean.

I appreciate you for choosing such a great topic for many arguments. In my opinion adulthood is not an age but a mindset. I believe you do not become an adult when you turn 18 but you turn into an adult when you start acting like one. An example would be it doesn’t matter if you’re old enough to drive because what really matters is knowing how to.

Ed, I found your post very interesting and provocative. I, for one, have never even considered why the age requirement for legal adulthood is 18, why drinking is legal at 21, and why renting a car is not considered legal until 25. It seems a common theme that with more life comes more mental experience and further physical development. 18 almost seems too young for legal adulthood, because although the individual is not yet physically and mentally developed, their parents have the right to completely cease giving them support. I found an article that details the pros and cons of the legal age of alcohol consumption being 21 in the United States, which I thought proposed interesting arguments as to why there should be two completely separate ages and why 18, being the legal age of adulthood, should be the legal age of alcohol consumption as well.

I think this debate has been a point of interest throughout our nation’s history. To me, 18 seems like a young age to have all the responsibilities as an adult. On the other hand however, it makes sense. By that time, most kids are off to college and need to gain the independence that turning 18 entails. Despite being a legal adult, 18 year olds are often not viewed as adults. Also, when 18 you’d think that you get the same rights as every other adult. However, this is not sure due to the age restrictions on other laws. This is a very compelling argument.

Hey there Ed, I really think that your question on legal age is interesting and has potential to spark large debates among those who support how it is now and those who do not. It is crazy to think about the amount of things people are able to do just because they turn a certain age while not even having fully developed their intelligence. It is all a matter of speculation of what should be done and how the society views people as an “adult”. The question you left the reader with is great because it causes us to wonder about how we feel about the legal age as of right now. I found an article that may be interesting in your topic.

Dear Ed, as I read your post I started to think about my life as a “child”. I am not 18 years old yet but I still feel like I have the same responsibilities as an adult. I feel like the whole legal age thing puts a lot of pressure and restrictions on those who are under age. At the end of the day we all worry about the same issues and we all matter.

Ed, this is a really interesting topic, and one that is relevant to a lot of people. Although I’m 18, which is the legal age of adulthood in the US, I find that in most ways, life hasn’t actually changed a whole lot. The system in America definitely doesn’t make sense to me. For example, why are you mature enough to drive a car at 16 but not enough to sign papers yourself? Or when you’re 18, why are you considered a legal adult and mature enough to vote and be drafted, but you still aren’t mature enough to buy a drink? Or in a lot of states, why can you smoke at age 20 but not drink? I look forward to hearing more from you about this in the future.
https://www.theatlantic.com/health/archive/2016/01/when-are-you-really-an-adult/422487/

I found this post really intersting and I agree with you on the points present. As I have approached my ‘adult years’ I have noticed that I am still treated like a child. While I am 18, I have found that myself (along with others) remain sheltered in our home lives and school lives. I find the age limits in the United States particularly confsuing. We can live on our own and fight for our country at 18 but can’t legally buy a drink. From the perspective of a young adult, the laws and restrictions present are beyond limiting to the young person. While we have certain freedoms, we still remain restricted in our ‘youth’. This whole concept is rather mind boggling to me, because I feel underprepared and misunderstood as a millennial, but so much is still expected of me.
https://www.thenation.com/article/democrats-18-year-olds-can-fight-not-drink/

Ed,
I really liked this article. I thought you were asking very good questions, and I think it is especially important to us as we get older and prepare to step into adult hood. I think that the age of adulthood can vary, and the laws around it aren’t incredibly clear. This https://www.thespruce.com/happy-18th-birthday-new-adult-3570791 is something I found interesting and I think you would like it.
Lexi

I found you article very intriguing, this is because I never knew that you have to be 25 to rent a car. Yet, you can buy a car at any certain age. How is this possible? Being considered an adult at 18 isn’t really appropriate because some of those 18 year olds are out there partying being a teen. I’d say that a person should consider themselves an adult when they actually have their life together and actually know where there going in life. Good article sir

Edweird, I find your argument very compelling. There is no understanding by what the actual age of becoming an adult is, our government gives us an age but we can not even really do anything at that age of 18. I am interested to know why we can be tried as an adult in court, join the military, and do many other things once people turn the age of 18, although we are unable to drink, and in some states it is illegal to smoke. I have found you an article that I believe can help you find what you are looking for in your argument.
http://www.indiana.edu/~engs/articles/cqoped.html

Ed, I find that your analysis of age limits for certain things such as voting, drinking, and being eligible for things such as war very compelling, as not many people consider why these ages were set in the first place. I am very interested to hear more about this subject because I often wonder why someone can give their life for their own country before being legally allowed to rent a car. I found a website that addresses this exact topic and will post it below. I look forward to seeing more about this in the future.