What’s Up With Utah’s Inversion Layer? 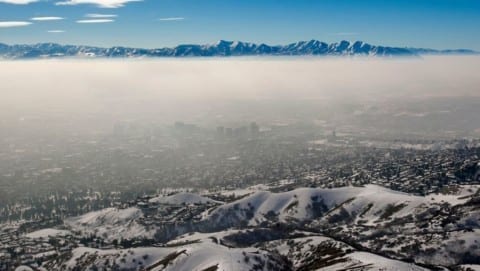 An inversion layer is formed when a reversal of the normal atmospheric conditions of temperature in the troposphere (the layer of the atmosphere closest to Earth’s surface), in which a layer of cool air at the surface is overlain by a layer of warmer air. Inversions usually occur during the winter months. They trap a dense layer of cold air under a layer of warm air. The warm layer acts very similar to a lid, trapping pollutants in the cold air near the valley floor. According to airnow.gov, four of the five cities with the unhealthiest air today are in Utah: Logan, Salt Lake City, Provo, and Bingham City. The article, How does Utah Compare to the World Most Polluted Cities? says that according to the Utah Department of Environmental Quality, on Tuesday, January 2nd, the PMT2.5 particles in Utah were between 60 and 80 micrograms. On that very same Tuesday, Beijing’s levels were 67. The American Lung Association ranks the Salt Lake/Provo metropolitan area as the 7th worst for short-term particle pollution in the country. PMT2.5 particles are inhaled in to the lungs. The article, Killing Me Softly: The Truth About Utah’s Air Pollution states that the absorption of PMT2.5 into the lungs can cause long-term problem such as heart attacks, arrhythmia, asthma, and decreased lung function. This proses a huge threat to children, athletes, elderly, pregnant women, and anyone who is outside on a day-to-day basis. 57% of Utah’s emissions come from mobile sources (cars, trucks, etc), 32% from area sources (gas stations, smoke stacks, etc), and 11% from industry (large power plants, factories, etc) (DEQ Utah). These percentages should encourage Utah’s residence to stop idling, carpool, ride bikes, and to push for better environmental regulations in such a beautiful state. As temperatures increase, Utah’s inversion layer will only get worst. It is time for Utah to take a leap towards better environmental, and air pollution safety before it is too late.

Hi Jenessa, inversion is a serious issue in Utah, especially in Salt Lake City. Environment issue is a long lasting problem and I think it takes time for us to solve this problem. I found that “on Tuesday, January 2nd, the PMT2.5 particles in Utah were between 60 and 80 micrograms. On that very same Tuesday, Beijing’s levels were 67” really interesting because I have experienced the bad air quality in Beijing long time ago when I go travelling there. But now, Utah’s air quality is even worse. Everyone should do something to protect our own environment.
Here is a resource for how we can prevent inversion: http://www.ci.slc.ut.us/winter-inversions-what-are-they-and-what-we-can-all-do-help

Jenessa,
The air quality in those Utah cities is alarmingly bad, I’m surprised that this issue isn’t something receiving widespread media coverage. Air quality is obviously most important for basic human health, but continued poor air quality could also damage the cities’ economies, especially since winter time is a major commercial season, and people would be less likely to go shopping in air they new was poor or if sickened by the air before. With levels of PMT2.5 particles, which are quite large, as high as Beijing that type of situation has to already be occurring. I agree that, at this point, it becomes the government’s responsibility to take action against the pollution; it would simply be in the best interest of every person as well as most local businesses.

Jenessa,
I really enjoyed reading your article. I have lived in slc my whole life and I had no idea there was that much that went into the inversion other than the vague answer always given of pollution. The facts and detail you went into were very interesting and eye-opening for me. I am also very upset by the inversion and do my best to carpool with friends and family to events and school but I know we should all be pushing harder with the legislation.
Thank you, I look forward to hearing more.

I totally agree with what you have to say about the inversion. We should be pushing our legislators to create for environmental regulations and we also need to educate our public because the effects on our citizen’s health is absolutely devastating.