What’s the deal with Airplane Safety? 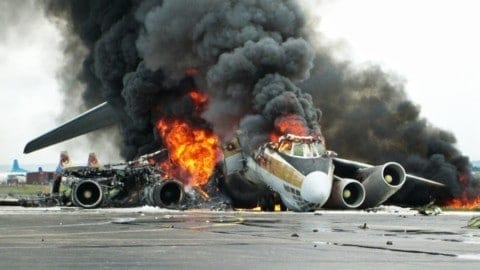 A fear of flying is not unusual, in fact it’s so common, there’s a name for it.  It’s called aviophobia, and 1 in 3 americans experience it. But is there a need for this fear?  Is it common for people to even experience a plane crash in their lifetime? The simple answer is no, but what proves this statement true?

From 2012-2016, over 3.3 billion passengers travelled on the domestic airways.  So you may be asking, how many of them died? It seems like we see plane crashes a lot, but that just simply isn’t true.  In this time, only 2 accidents, both occurring in the same year, 2013. During those 2 accidents, only 9 people died. In fact, there hasn’t even been a commercial airliner crash in the United States since February of 2009.  Which is ironic, because most people won’t even affiliate with a plane crash some how, or some way, in their entire lifetimes.

All in all, the main takeaway is that airplanes are much much safer than any of us could ever even imagine.  Especially commercial planes, which are all either turboprop or jet, are extremely reliable, and it’s virtually impossible for a jet engine to stop working unless some outside force acts upon it.  For example, in 2017, there were 0 deaths by commercial aviation. Almost 700 people were killed on a boat, 760 by train, and an astonishing 37,133 deaths on the road. Lastly, Dr, Arnold Barnett speaks out about airplane safety, saying that a person would have to fly once a day, every single day for 22,000 years before you would statistically die in an airplane crash.  Debunking the myth that planes are unsafe.

Hello Charlie, I think that plane safety is becoming better and better. The reason I say this is because my older brother works for Boeing and I contacted him about this issue. He recommends that you try and contact some of the people at Boeing and see what all they are doing to fix these problems. good luck if you proceed with doing this you may also talk to me and get his contact information about these problems.

Howdy Charlie,
I agree completely with what you mentioned. There is a big fear surrounding airplanes. What creates this fear is most likely how modern the airplane really is. Most people are more comfortable with cars and boats because it’s not a relatively new thing.
Here is a cool website that gives instructions on how to get over the fear of flying
https://www.smartertravel.com/fear-flying-18-ways-cope/
Hope you enjoy!
Best,
Kaan

Charlie, I also think that plane safety is about as good as it can get. There is always a chance that something may go wrong. Many people fly everyday and very few people ever crash in a plane. The numbers so that planes are actually very safe. Here is a link to help understand. https://www.google.com/search?q=airplane+safety&rlz=1CAHJUL_enUS759US759&oq=airplane+safety&aqs=chrome..69i57j0l6j69i60.9050j0j4&sourceid=chrome&ie=UTF-8