What would you choose?- Wealth VS. Happiness

Home What would you choose?- Wealth VS. Happiness 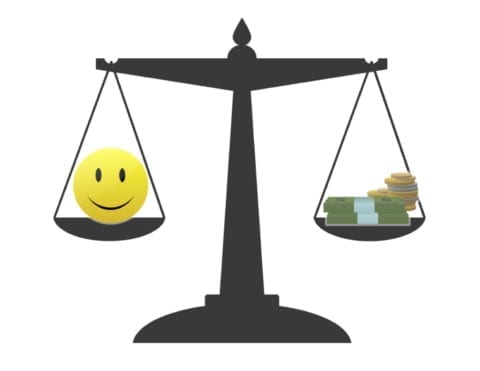 Personally, I think I would choose wealth over happiness because since our modern-day is such a capitalistic society that without money, you cannot do anything and with money, you can do anything. So I thought that if I have enough money, I can be happy with it. But there were so many more factors that happiness gives you that I did not know and did not consider. Especially happiness and contentment that teenagers have during their childhood affect their future a lot. A lot of people want to choose happiness when it comes to the point where they need to find a job or future career. If your interest is in a field of study that can lead you to wealth then perfect, but if not you might struggle with financial problems with the job that you chose because you like it.

“The happier ones continued to earn bigger paychecks.” This is a quote from an article that I found and it concludes that happier teens end up with a successful life with wealth. The research team did research based on American data from the 10,000 strong survey. It showed that gloomy teens ended up earning 10% less than their peers while exuberant teens earned up to 30% more. The happiness that teenagers feel can be different but most of the time, their home backgrounds matter the best. The happier they are, the they make bigger paychecks in the end. Because of their exuberant personality, they have an easier time getting through school and work. Furthermore, the study expanded to the influence of scientific factors, such as the happiness gene inside of women’s bodies and certain nutrients that will make people happier. But this does not mean that teenagers should just give up their school work because they get stressed from it because overall, education is helpful to get a good job eventually. Now we need to look at which is more important- wealth or happiness? To look at it I found an article that explains it.

The main point that the article points out is that no matter how much money you have, you can be either happy or unhappy based on what you expect to do with the amount of money you have. This is very important for teenagers because teenagers should realize and determine what kind of life they want to live. With the same amount of money, people can feel that they have enough money to be happy and content with their life while on the other hand, some might think that it is not enough money. This whole article concludes that happiness and wealth are correlated but nowadays, it is not that one of them results in the other but it is based on how you make a good connection between those two factors to make a good balance of your life. There is a quote from the articel by Warren Buffet who is one of the most richest person in ther world.

“I can buy anything, basically,” Buffett says. “I have been on 400-foot yachts, and I have … lived the life a little bit with people that have 10 homes and everything. And I live in the same house I bought in 1958. And if I could spend $100 million on a house that would make me a lot happier, I would do it. But, for me, that’s the happiest house In the world. And it’s because it’s got memories, and people come back, and all that sort of thing.”

So this article completely changed my thought which was that the job that you chose to be happy can lead you to an unhappy life because of some financial problems.

Coming back to the question, “Which is more important- wealth or happiness?” Nowadays, the more general opinion is that you need to find the balance between those two rather than choosing one over the other because one of them does not result in the other. It is hard to say which is important than the other because both wealth and happiness are a priority in order to have a good quality of life. Important thing is that wealth and happiness are correlated massively that if you mess up with one of them, the other can be influenced a lot.

Dear Hanna,
I really am amazed by the topic you chose to discuss about, it’s such a great question that truly makes you think twice. I especially liked how to gave information on both sides of the argument along with listing major points to it.

A couple sentences that caught my eye was “A lot of people want to choose happiness when it comes to the point where they need to find a job or future career. If your interest is in a field of study that can lead you to wealth then perfect, but if not you might struggle with financial problems with the job that you chose because you like it.” This came to my attention because I have thought about that before, either choosing a career I would truly enjoy or being unhappy with a career I dislike but yet get good pay.

I appreciate your writing, and hope to read more of it! It’s a topic everybody thinks about at some point in their life and is important.

You brought up a lot of good points! I am and always will be on the side of wealth over happiness but you did a good job portraying the arguments and shutting down parts you may not agree with. Well done.