What would Baldwin Say?

Home What would Baldwin Say? 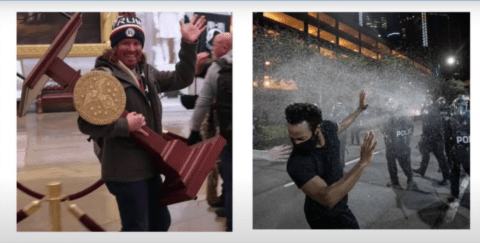 In the first photo the Trump Supporter is happy and waving to the camera’s. He seems calm and fine. He is holding Nancy Pelosi’s lectern/ TheHouse speaker’s podium.  He is wearing a Trump hat and has an american flag scarf or something of that sort. He is also wearing a big coat.  It makes me wonder what made him think that this was a good idea. It seems that there aren’t people after him in the photo for what he was doing. It looks like the police are fine with what he is doing.

In the second photo the person is trying to block what seems like pepper spray from getting into his eyes.  They are not holding anything. He is wearing a T-Shirt, Pants, and a Face Mask.  The photo makes me think about the pain they had gone through.  The BLM Protesters were treated unfairly compared to the Trump Supporters. There is a clear bias of the two.

White Supremacy is something that is obviously still an issue in this country.  The police are here to protect but most are not doing it properly. Being Colored in America means that you are automatically at more risk of getting killed by police.  The police are serving the government by protecting the community. It is said that all American are said to be protected under the Law but It seems like only the White are protected under the law.

The book If Beale Street Could Talk can connect with this topic since they were experiencing similar events in the book. Fonny was arrested for something that he didn’t even commit.  It seems that issue won’t get fixed any time soon. “Color is not a human or a personal reality; it is a political reality.” It has turned to a point where the ethnicity of people have become the main topic for political debates.

“I know that people can be better than they are. We are capable of bearing a great burden, once we discover that the burden is reality and arrive where reality is.”

The Trump supporters have not come to realize that they did not win the election. They still believe that the election was rigged although it has been proven multiple times that it has not been.  Some people have come to their senses and realize what Trump is doing is wrong and he is misleading others. In many situations people don’t want to face reality. In this situation it seems to be the same.