What it Means to be American.

Home What it Means to be American. 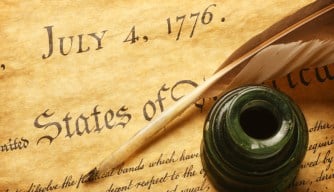 In 1882, Rear Admiral George Balch wrote the Pledge of Allegiance, which reads: “I pledge allegiance to the Flag of the United States of America, and to the Republic for which it stands, one Nation under God, indivisible, with liberty and justice for all.” Each word chosen by the author was specifically designed to make people feel patriotic, inseparable, and united.

America is not what it once was. In the article “Race and the American Creed,” Latoya Frazier writes “We have more of a structured racism now.” Racism, when given the chance, makes our country crumble from the inside out. Sebastian Junger, the author of the book, Tribe, says, “The U.S. is so powerful that the only country capable of destroying her might be herself, which means that the ultimate terrorist strategy would be to just leave the country alone.” The division of our country runs so deep that it became normal for people to hold so much resentment towards each other. Stepfan Hollinshed, a speaker in the documentary American Creed, says, “The thing that makes this country great has been torn down.” One might say the thing that has been torn down is the openness of America’s arms to new people.

To be an American means to be united. We were named the United States of America, so Americans can come together to solve problems and to help this country thrive. Not to become separated over issues that Republicans and Democrats can’t agree on. In his book, Junger describes research findings that suggest people will feel better psychologically if they have more involvement with their community. On page 108, Junger says that “If the human race is under threat in some way that we don’t understand yet, it will probably be at a community level that we either solve the problem or fail too.”  A community prospers when every person in the community comes together in harmony.

One might say that immigration is the reason of why America is losing its identity, but there is a complexity that many of those people don’t acknowledge. In “Is Immigration Really the Problem?” Marco Saavedra says, “Rich migrants and foreigners from other first-world countries are apparently not the problem. Nor are neoliberal trade agreements that wreck indigenous economies or the mass media seduction to sacrifice everything for a better a life in the United States. Nor is America’s insatiable appetite for drugs, that turn barrios into battlegrounds, or the corrupt remnants of a war on communism that leaves thousands with no alternative but to flee north.” Knowing all the sides of an issue can make Americans informed and being informed could be the greatest contributing factor to ending this division.

The only way to change this hate is to become unified. Unity doesn’t mean everyone should have the same culture. America is beautifully diverse. Being unified is simply being able to come help each other out. Being unified doesn’t mean you have to agree with every statement someone says. Being unified means listening to those we disagree with in order to understand their concerns. Frazier writes that “An open society must be the center of America.” An open society is not judgmental when someone else has different beliefs. Everyone is capable of giving an opinion. Americans can change the standard way of thinking in our country if people become educated on issues before sharing an opinion. Knowledge is key.

The Declaration of Independence, a document that is the basis of our country, states, “We hold these truths to be self-evident, that all men are created equal, that they are endowed by their Creator with certain unalienable Rights, that among these are Life, Liberty and the Pursuit of Happiness.” Holding these rights close to our hearts is what makes someone an American. Trying to take these rights away from an American is very un-American. Now go out and become knowledgeable about issues in America, be respectful towards your neighbor no matter what ethnicity or religion they are, and help communities flourish.

Hi McCamey! Thank you so much for your post! I really enjoyed reading it! I totally agree with you when you say that America needs to become more united. Now more than ever, we need to be able to come together on what we agree on versus what we disagree on. A lot of this disagreement is coming from racial issues. I think that many people make assumptions about people who are different than them, who they don’t actually know about. These assumptions can create misunderstandings which I believe creates the problems that we have today. Thank you for your post, and I look forward to reading your future work!