What Is Did The Tech Boom Cause?

Home What Is Did The Tech Boom Cause? 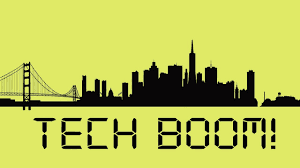 The rent in Oakland has doubled in price in the past 10 years! But that’s not the only number that has increased in the last ten years, 4.1 million jobs have opened in the Bay Area and 10 months of straight employments(Avalos). The tech boom opened a large amount of tech jobs during the early 2000s and in the late 90s. A lot of huge tech companies came to the Bay Area, especially in San Francisco, and helped build the economy. According to the research the tech boom was great at first because it opened a large amount of jobs for the public but 10 years later it raised rent and forced former residents to move out.

The tech boom was very helpful to the community because it opened a huge amount of jobs for the Bay Area community. George Avalos is a business reporter for the Bay Area News Group. He explains in the article called “Tech employment in Bay Area reaches record highs” published in Mercury News in June 14, 2019 “At the end of April, the Bay Area boasted 831,700 technology jobs — 113,000 more than the dot-com peak of 718,700, which was achieved in December 2000”(Avalos). The tech boom opened over 800,000 jobs for the public it this was just the beginning of the tech boom imagine how many jobs/ companies have opened because of the tech boom in the last 10 years. All of these help a lot of people look for what they want to accomplish in their life and also brought a lot of exposure to the Bay Area. This caused lots of mainstreams stores arrive to the Bay Area which helped grow the community. As shown by an Oakland resident. In an interview with Jorge Rodriguez he is an Oakland resident that has been living in Oakland for over 20 years and he said “when I first got here There wasn’t much of options for jobs but now all these tech jobs started opening up then big stores like Best Buy, Target, Walmart, starting opening up then more jobs and technology spread around”(Rodriguez). As Rodriguez said the “big stores” or the mainstream stores started opening up and helped convince lots of people to start to move to san francisco which helped grow the population by 100,000 in the span of 10 years which helped grow the economy and also made san francisco be one of the best cities in the world

The tech boom was also very unhelpful because it raised the rent and displace a large amount of residents. The tech boom almost doubled the rent in the Bay Area is a lot in the span of ten years. The tech boom helped create a lot of more housing but it’s overly priced to live in the Bay Area, especially in san francisco, the average rent in san francisco is $3,733 thats double then the national average,also is illogical that the rent is that high because no one will pay it. The rent is undeniably high, the rent went up by 1,000 since 2011 and this also cause cities around san francisco that the rent goes up so everywhere someone would go in the Bay Area it wouldn’t be the cheapest house and that’s a very significant increase which the average person might not be able to afford and are forced to move somewhere they don’t want to be as shown in the text by cnn written by Ahiza Garcia Which is a writer for CNN Business covering technology from CNN’s San Francisco Bureau and she wrote “The Bay Area’s tech boom famously created an influx of companies, workers and jobs, but in 2012, it ignited a housing crisis that’s made it difficult for many people, especially those in minimum wage or entry-level jobs, to live nearby.”(Garica). The housing was such a problem the writer chose to use the word “crisis” which just goes to show how much of a problem the housing was during the tech boom and still a housing problem now. If there’s a housing problem and the rent is an abnormal amount of money who will want to live here, no one and that’s horrible because then the community will be smaller and smaller to the point wend a large portion of the city will have to force to move out of the city and try to adapt into a whole different life style. In an interview with an Oakland resident named Alicia Mikery and she said “when I first came to Oakland I didn’t see all of these tech companies but now every where you go there is a tech company offering a job”(Mikery). A lot more jobs are being offered and this will lead to more people coming to the Bay Area and for this the city will need for housing and that will cause the rent to go up because of all the new housing and people will be forced to move out and this will cause an influx of problems.

In conclusion, According to the research the tech boom was great at first because it opened over 800,000 jobs for the public but 10 years later it raised rent and forced former residents to move out. If the city doesn’t start to change something the Bay Area will turn into desperate city because the rent will be to high and no one will be able to afford so for the longevity of san francisco the city as the people have to make in endeavor to ty to fix San Francisco before the government ruins this city for our predecessors.

This article talks about how the tech boom hurt the Bay Area. It brings up points like the housing crisis and the rent amount. Garcia Ahiza is a writer for CNN Business covering technology from CNN’s San Francisco Bureau before that she was covering sports. She has many jobs and has written many articles and has a lot of experience of writing. This article also recent it was written a little over a year ago which shows the information is still valid.

This article talks about how many jobs the tech boom opened and how helped the jobs were for the community. Also talks about the rate that the jobs are growing by and why it’s nice. It’s also very credible because the article was released just about two months ago, which means it’s very up to date. The author also specializes in the Bay Area and Oakland so he knows what he’s talking about.

This interview was about how Oakland has changed over the years and what has it affected. We also talked about some of the big stores finally coming to Oakland and why it was helpful for the community. Jorge has lived in Oakland for over 20 years so he has seen a large amount of change Oakland has gone through. He also was here during the tech boom first launched and all these tech companies came to the Bay Area.

This interview talks about how the common people are offering tech jobs now. This interview also talks about how easy it is to look for a tech job. Alicia has lived in Oakland for the last 18 years she has seen a large amount of the tech boom and has a good idea of what the tech cause and how it helped and didn’t help. She also knows a large smog the Bay Area she travels a lot around the Bay Area and knows this area very well.