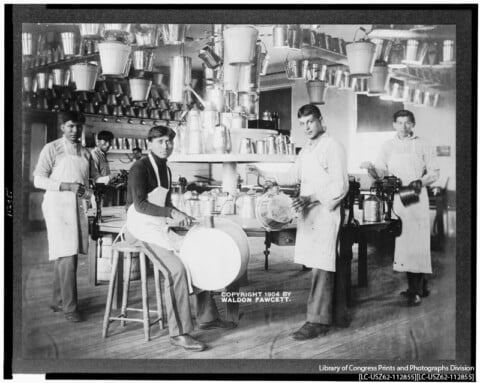 In the article “Haaland Announces Federal Indian Boarding School Initiative” (McGraw Hill) I learned that the Bureau of Indian Affairs and many Christian church denominations separated thousands of Native American children from their families and sent them to boarding schools in thirty different states. This happened from the 1819s – the 1970s. In these boarding schools, they were forced to strip away their Indigenous culture and act more “white”. This was extremely traumatic for them and their families. What led to this investigation was that barely this year, during summer, the bodies of 215 Indigenous children were found at a former boarding school in British Columbia, Canada. More than 1,000 burials have been found in Canada this year alone. The acts that were forced upon these innocent children in these boarding schools were beatings, food deprivation, and their native names were replaced with European ones. They were not allowed to speak their native languages and they had to cut their hair, which was very spiritual for them.

I think the history of these boarding schools created to strip away Native American’s culture/beliefs is a huge deal that needs attention because it caused trauma for generations to come. Not only did it affect the children but also their families. Future generations weren’t able to practice their beliefs because it wasn’t taught, which is extremely sad. Recognizing what happened in the past is a step closer for the Native Americans to heal.

Why do you think people thought it was okay to have boarding schools dedicated to making individuals more “white”?

Hi Andrea,
Great post! I agree the history of these boarding schools should be recognized.