What Goes Around, Comes Back Around

Home What Goes Around, Comes Back Around 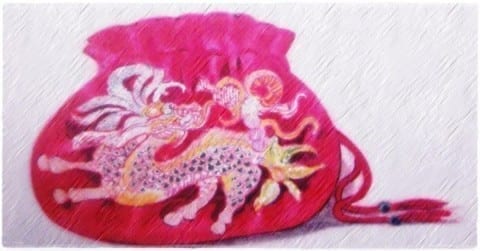 The Ch’i-lin Purse is a collection of ancient Chinese Stories, retold by Linda Fang.

One of the stories is about a bride from a wealthy who gives away her most important gift to a poor bride.  She gives her a Ch’i-lin Purse.  The brides get married but six years later a terrible drought occurs.

The once wealthy bride, Hsisng-ling, had never been to a food distribution shack. Her first time there she got the last share of food but gave it away to an older lady who was sobbing.

A butler saw how unselfish she was and told her his master needed someone to watch over her little boy and would recommend her for the job if she’d like. She accepted this opportunity.  Her boss told her that she was allowed anywhere except the Pearl Hall.  The little boy was spoiled!

One day they were playing with a ball and it ended up in the Pearl Hall and wouldn’t stop crying until he got his ball.  So Hsisng-ling decided to get it.  She discovered that in the Pearl Hall the Ch’i-lin Purse was there.  She started to cry and one of her bosses found her, Mrs. Lu. the

They both came to the conclusion that the purse once belonged to Hsisng-ling.  Mrs. Lu was so grateful and happy that she found Hsisng-ling and wanted to help her now that she needed it as well.