What Does the Word “American” Mean to You?

Home What Does the Word “American” Mean to You? 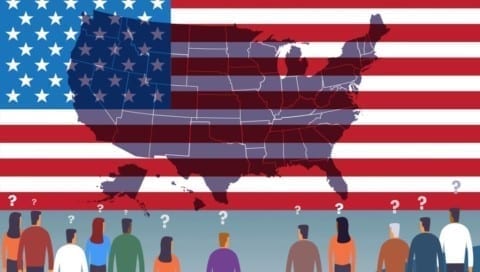 America is variety, there are so many different opinions and ideas about values, cultures, creeds, and in general, what it means to be an American. These values keep transforming as we become an even more diverse nation. People from all over the world come to the United States for the hope of a better life and more freedom in a new nation. In fact, Dr. David J. Skorton, Secretary of the Smithsonian says “ One of the defining metaphors of the United States has been that our country is a “melting pot” of immigrants from around the globe.” The United States of America is a nation of immigrants. Unless you are Native American, you are the descendant of an immigrant. Your ancestors came here for all different reasons. Whether they came here searching for religious freedom, safety from prejudice or persecution, were forced to come here, or came in the search of a better life: our ancestors are from other countries. And, as more immigrants continue to come to America, we need to remember that. We should be proud that people from around the world want to come to America.
America was built on freedom: religious freedom, freedom of speech, press, petition, assembly, and the pursuit of happiness. I believe that America stands for freedom. Everyday we all stand up for our freedom, no matter how different our opinions may be. We all fight for what we believe in because we have the privilege of doing so. Here, all citizens get to vote, and if you disagree with the government or someone else, you can voice your opinion. We aren’t a dictatorship where you can’t say anything against the dictator. We can all celebrate our own cultures and ideas in our own ways.
Some people may argue that America isn’t such a great place to live. In a NY Times article, Gregor Aisch and Alicia Parlapiano made a chart and it showed many different conflicts today. Some of the many issues that stood out to me from their chart were dissatisfaction with government, civil rights and race relations, immigration, religious conflicts, poverty, terrorism, economy, and unifying the country. I agree with them that there are many issues that our country needs to work on. It would be unwise to ignore those issues. But at the same time, I don’t think that it necessarily makes America a bad place to live. At least here, we can admit that we have issues and be able to try to express the issues to the government though voting, marches, calling our legislature, and peaceful protests. If we could just unify the country by continuing to listen to opinions and have those difficult conversations while still being respectful of each other, then I believe we would have a more improved country for everyone.

Hi Audra! I love this post about what it means to be American to you. One line that especially hit me was, “If we could just unify the country by continuing to listen to opinions and have those difficult conversations while still being respectful of each other, then I believe we would have a more improved country for everyone.” I think what this comes down to is tolerance, which should be one of the most important values to every American. You listed a bunch of the issues our country faces, and without tolerance of differing opinions, nothing will get done. I read this article from the L.A. Times that I linked below about the issues of tolerance in America. I’d be curious to see what you have to say. Great work! http://www.latimes.com/opinion/op-ed/la-oe-dunkelman-tolerance-u-s–segregation-by-choi-20140906-story.html