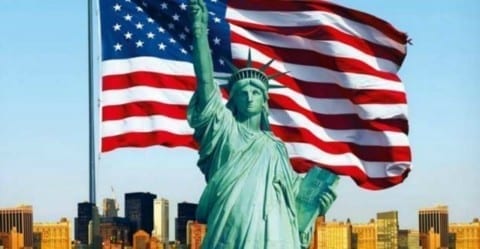 What does it mean to be American? I believe the answer to that question is relative to whom you ask. I started pondering that question and got stuck, so I asked my mother what she thought it meant, and she said:  “I’m proud to be American. It’s a place that allows me to be who I am, to practice my religion without fear, it gave my family a better opportunity. I’m the first in my family to get a higher education, but yet my dad was able to become successful by working very hard. We have the freedom to move, and to live. Is America the perfect place? No, but it’s one of the best places there is to have a life.” After hearing this I first thought being American meant having freedom, but that belief soon changed.

Baseball Manager Joe Maddon stated in the documentary “American Creed” “I think being American is about coming together, everyone enjoys the freedom we have created but with that freedom comes the responsibility to maintain it.” (American Creed.) I then realized that my original view did not look at the whole picture; being American means more than just having freedom.

The American Dream is a wide spread concept in America. Essentially it means that with enough hard work and perseverance you can achieve anything you set your mind to. In the article “Superman and Me” the author talks about how he worked harder than everyone around him when it came to reading and writing, and he eventually became a professional writer. He states “…I refused to fail. I was smart. I was arrogant. I was lucky. I read books late into the night, until I could barely keep my eyes open. I read books at recess, then during lunch, and in the few minutes left after I had finished my classroom assignments… A little Indian boy teaches himself to read at an early age and advances quickly. He reads ‘Grapes of Wrath’ in kindergarten when other children are struggling through ‘Dick and Jane.’…Despite all the books I read, I am still surprised I became a writer…” (Superman and Me). Essentially he is telling the story of how even though he comes from a family of not very strong readers or writers, he still worked very hard on his own skills and eventually became an author. With this in mind I reflected and added on to my own definition of what it means to be american and moved on with my research.

I then stumbled upon a New York Times article under the “Shared Shorter Choice Readings” where they interviewed teenagers about what it means to be American. One student had this to say,”Well people ask me how are you American? Or how are you Muslim-American? The answer is there is no one way, I am me and that is the most American thing about me, it is to be me unapologetically day in and day out. People need to look out for each other more to make sure they can be themselves every single day” (What Does America Stand For). This resonated with me because he didn’t just talk about freedom, but rather he expounded further upon that idea by talking about the freedom to be who you want to be, and helping others become who they want to be.

After hearing many different perspectives, my personal understanding is that being an American means having the freedom to choose your path in life, and be the best person you can be, having the opportunity to use hard work and perseverance to move up in the world, and looking out for the people in your community to make America a better place for everyone so they can be themselves.

Thank you very much! My mother is an immigrant from the middle east who moved here in middle school with her family to start a new life. I really liked the article and the perspectives that it told, I will definitely incorporate this information in future articles of the subject.

Adam, your post really makes me think differently than I used to. As a non-American, I really liked how you mentioned that being American is to come together because since I came to this country all alone just to learn more cultures, I do feel neglected sometimes. But just by working hard and improving myself to be part of this world, I could feel that I am getting involved a lot even though I was not born as an American. Also, I appreciate how you tried to look at different perspectives and put them together to build up your own opinion about it.
This article could give you some idea of why people are so into the concept of the “American Dream.” Foreigners tend to look after the unique characteristics that Americans could have.
https://www.thoughtco.com/what-makes-americans-unique-4048010

Thank you! I really enjoyed reading that article, it had a lot of very interesting points. I am glad I could at least make you think. It shouldn’t matter if you were born here or not, you are still a part of America and you contribute your own unique ideas to the melting pot and that will never change.

I think this is a very well written article on a topic that is very important in today’s time. For me, I am not American, in fact I am an immigrant from the U.K and the first part of your article where you included your mother got me really intrigued. I think that was a strong part because it is someone that many can relate. I don’t know your background or your mother’s, but I can get a sense of it from how she explained how it felt to be American.
With that being said, I think including more things about the BLM movement and tying that can help strengthen your article. https://edition.cnn.com/2020/10/19/golf/kirk-triplett-blm-pga-tour-golf-spc-spt-intl/index.html this article can maybe help you get some information.