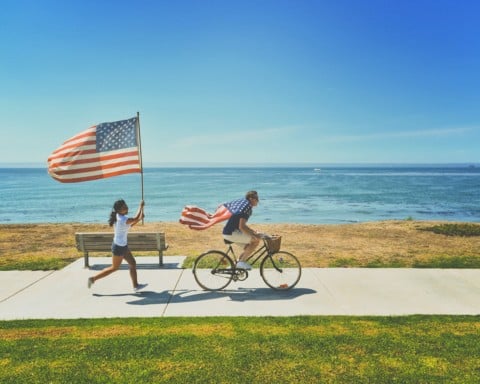 Being American means different things to different people. To some, it may mean patriotism, voting, eating chili at the annual 4th of July cookout, or things of that sort. However, to me, it means having freedom, working hard, respecting other cultures, and the American Dream.

According to the Bill of Rights and the  Declaration of Independence, some key American beliefs and values are equality, liberty, freedom, and hard work (Jefferson; Madison). But out of these, the most important are freedom and hard work. Freedom is shown by fact that we have the opportunity to do what brings us happiness, despite what others think. This allows us, as Americans, to make choices for ourselves; ideally meaning aiming for high, yet attainable, goals. Those goals will vary from person-to-person, for example, if someone is from a family born in America for several generations, they will have different ambitions than an immigrant. However, almost everyone has the goal of being successful in America and being able to provide a comfortable life for their families. That is not attainable without hard work and perseverance.

Hard work is an attribute that the American Creed was built off of. According to the PBS American Creed documentary, the American Creed states that it doesn’t matter where you came from, it only matters where you are going (PBS American Creed). This shows that Americans are hard-working individuals and are able to rise to the occasion. Even if someone is not born rich they make the most out of what they have. Immigrants are some of the most hardworking people in America, and America was built off of their sacrifices, hard work, perseverance, and strength. Without immigrants, America would not be the country it is today. Immigrants shape America with their constant hard work and their distinct cultures.

America is considered a “melting pot” with its many cultures, which all came from various immigrant groups. Still, a majority of people communicate using the English language, practice Christianity, and celebrate Christmas. All cultures impact the people of the United States because it creates our “social norms” which many people follow and generally live by. It also distinctly defines our country and what the people in a given area stand for. To be American is to: rise to the occasion, to understand that it is not only about you and your culture, and to understand that other cultures are not “wrong”. The more that this idea is strayed away from the more divided America will be, resulting in more trouble for our people moving forward. We need to be open to learning about things from different cultures.

No matter what your cultural and religious beliefs are, according to this country’s values,  everyone has a fair chance at achieving the American Dream. The American Dream is working really hard to have the chance at reaching your goal while knowing that it may not happen. It stems from the belief that people should have equal opportunities for a good life, prosperity, and success. According to the PBS American Creed documentary, many things are needed to reach this goal, but it all starts with having supportive people in your life and having a supportive government system (PBS American Creed).

No matter what an individual’s goals are, my definition of being American will lead them on the path to achieving it. Not being so ignorant in terms of other cultures’ views, being a hardworking individual, and having freedoms are what make up our country’s being and will lead to prosperity. In short, being American means having individual freedoms, working hard, respecting other cultures, and following the American Dream

Aditi, I enjoyed reading this! I agree that being American means being accepting of other cultures. I think our country is very unique in that we were formed by people from many different cultures. Some people think, as you mentioned, that to be American means to conform to certain western cultural beliefs. But in reality, there is no “American” culture, because it is constantly changing and different for every person.

I completely agree with your arguments in this essay. Our country is made up of so many different cultures and because of this everyone will have their own ideas of what it means to be an American. I believe that the idea in itself is more of a personal opinion than it is a concrete definition.

Aditi, I really liked the points you brought up in your essay. I agree that everyone in America has a unique perspective on what it means to be an American. I liked how you brought up the point that a family who has lived in the U.S for multiple generations, will have different goals than immigrants. I agree that immigrants are some of the most hardworking people in America. I liked your statement in your fifth paragraph. Americans need to understand that different cultures are not “wrong” just because they don’t align with their own culture.