Home What Does It Mean To Be American? 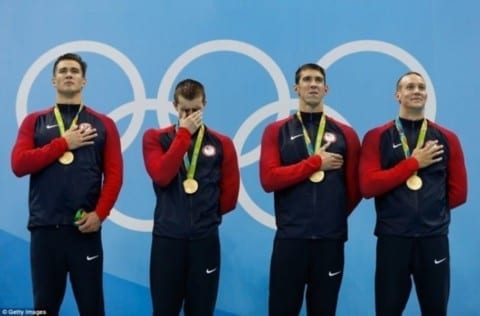 One thing that stands out to me about being American is our patriotism. Every sporting event I have ever been to starts out with our national anthem. Everyone in the arena stands at attention to the flag and sings the lyrics with such love and respect for our country. The lines that stick out to me most are “Gave proof through the night that our flag was still there. Oh, say does that star-spangled banner yet wave”(Roberts). These lyrics show the fight that our country has gone through for our independence, and I believe these lines are the ones that bring people together.   They bring people together in such a way that is more complex than we can describe. Every four years I watch the olympics and I have realized how the Americans come in with such pride and confidence to represent our country and work together to get American victories.When the athletes stand on the medal podium and our national anthem is played it touches so many Americans and gives us all chills.

Another thing that stands out to me about being American is our freedom. We are very lucky to be free and have individual rights. For example, women are able to work and be just as successful as men and not be treated like property. We are also very fortunate in the fact that we have the opportunity to go to school and get a good education so that we can be successful. Education allows us to learn the fundamentals for life and the workforce and that is a fight that many countries still face today. And lastly, the U.S. Ammendments are another vital part to our freedom.  In 1791 the first ammendment was created stating that “the constitution prevents the government from making laws which respect an establishment of religon, prohibit the free exercise of religon, or abridge the freedom of speech”(“First Ammendment to the United States Constitution”). We have the right to say and express what we feel without being penalized for it and that’s something that still today many countries don’t have.

In Conclusion,  Americans work to be successful and have what they want and that is a huge part in defining our country.As an American I believe we should be grateful for what we have and continue to make a difference in other  people’s lives just by doing little things.

Lauren, the concept of what it means to be an American is very well explained in your piece. I too, sing the national anthem with respect for our country and the line about the flag still being there is a line that shows we very well deserve our independence. It is amazing that women can have jobs just like men and have the same opportunity to succeed. Our freedom is one thing to be very grateful of and take advantage of because we the people could be in worse conditions. We have the freedom of speech, assemblage, religion, etc. and we should be able to say what we want to say without being penalized for it.