What Do We Believe in?

Home What Do We Believe in? 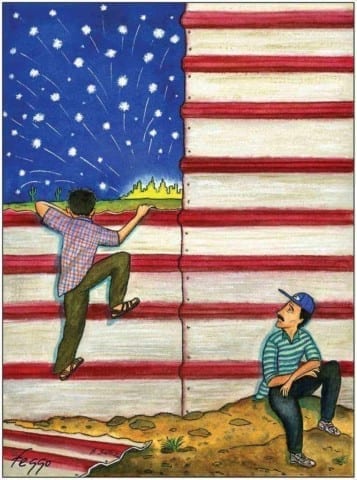 What exactly is American creed? American creed is subjective; it is based on the individual’s cultural background, personal experiences, and beliefs, amongst other factors. As a Korean-American, my unique interpretation of America’s system of values is based upon the idea that anyone can succeed with dedication. I would define America’s values with these three: equality, opportunity and diversity.

It is debatable whether equality exists in America considering minority groups are often neglected. Even though we cannot definitively say that America has achieved complete equality, it is a fundamental value that has been highlighted throughout history. According to the Declaration of Independence, “All men are created equal”(US 1776).  This statement demonstrates how the United States was created upon the basis of equality. In addition, William Tyler Page asserted in the American Creed’s document which was accepted by the United States House of Representatives that America is “established upon those principles of freedom, equality, justice, and humanity for which American patriots sacrificed their lives and fortunes”.

Opportunity and the American Dream come to my mind when I think of America.  In the past, people around the world immigrated to the United States with the mindset that with hard work, success was guaranteed. That is the old American dream.  According to Keuilian, the new American Dream is the “entrepreneurial journey that is unlike anything that has existed before”. He states that it is easier than before to start as an entrepreneur in America. He shows how lots of opportunities can be found in America in business areas.United States of America is a place full of opportunities.

In recent years, however, people refer to the United States as a salad bowl instead of the traditional metaphorical melting pot. The term “salad bowl” describes America very well because diverse cultures blend to form one great nation while individuals maintain their own identities and shapes. Like a salad, America consists of many cultures and values. According to Keating and Karklis, diversity is increasing throughout the United States of America. The statistics depicts how diversity is a big part of America- that is continuing to grow in importance.

Equality, opportunity and diversity: this is the American creed. The United States of America couldn’t be accurately explained without referencing these values. These values are not only America’s fundamental values but are also values that we should live by as Americans.