What Do Immigrants Think of America?

Home What Do Immigrants Think of America? 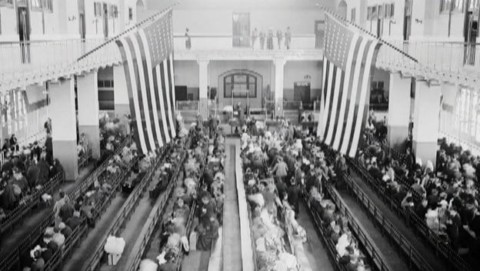 There are many questions pertaining to the American identity. One of these that interests me is what do foreigners think Americans values are? There are many answers to this question since there are so many different viewpoints. One viewpoint that I will specifically focus on, is the opinion of the immigrant.
When trying to determine the views an illegal immigrant has on the values of America, a good place to start is to look at the immigrant’s motive for coming or attempting to enter America. Many accounts of these motives are found in Luis Alberto Urrea’s book the Devil’s Highway, a story about illegal Mexican immigrants. Two of these immigrants, Reymundo Sr. and Reymundo jr., took the dangerous journey to America in order to make their lives easier. “The planned trip was a gesture of love.”(Urrea 51). Another named Enrique Landeros Garcia wanted to go to America in order to give his son a “straightforward chance at a future.”(Urrea 52).
The documentary American Creed from PBS and Citizen Film forthcoming in 2018 also shows another viewpoint that immigrants have of America: the non-inclusive one. In the time codes 6:00-8:10, it describes the town of Hazleton, Pennsylvania, an economically failing area with a large population of illegal immigrants. Throughout the video section it shows multiple clips of people protesting against illegal immigrants. One specific clip shows a Mexican man complaining that people keep telling him and others to leave, which he considers an act of discrimination.
Another idea that immigrants associate with America is the ownership of a firearm. According to Christopher Bodeen from Business Insider, most foreign countries are baffled at why America continues to allow gun ownership, when shootings and massacres continue to occur. Some people, like filmmaker Sohail Hashm, believe that American gun ownership is based on discrimination, and the common view of America as a world policing force. Many other countries also struggle with discrimination among their people, but almost none have as many racially fueled killings as the U.S. does. As Tokyo patent attorney Hiroko Takimoto puts it, “Racially motivated killings are simply something we people cannot understand.”(Bodeen).

I am satisfied with your post becausese it talks about the different perspectives of US immigrants which some I can relate to. There are different reasons why people want to move here, but in my opinion there is just one goal: To go to a country that offers many opportunities. It is just a sad truth that there some people took a ‘dangerous journey’ just to be called “illegal immigrants”.

One thing you said that stands out for me is: “immigrants associate with America is the ownership of a firearm”. I think this is interesting because i never thought that this can be a reason for people to migrate to US. I, myself moved to US to be with my family and grab great opportunities that my home country did not have. But migrating just for the sake of having legal firearms? I think that is a smart strategy but also dangerous. People might get hurt intentionally and accidentally.