What Can We Do?

Home What Can We Do? 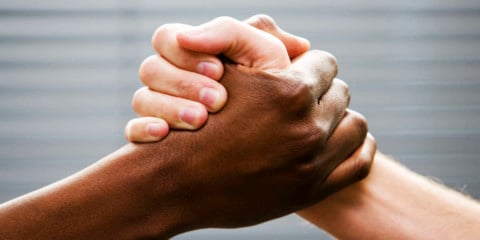 Terms like ‘race’, ‘gender’, and ‘religion’ have become increasingly controversial terms. With campaigns like ‘Black Lives Matter’ and ‘Gender Equality’, many of these issues have come to higher light and are making progress in support. More recently–within the last year–there have been several accounts of peaceful protests, all following the lead of Colin Kaepernick, a former quarterback for the NFL San Fransisco 49ers. At the beginning of the 2016-2017 NFL season, Kaepernick sat on the bench during the national anthem. He later changed to kneeling because it was a higher sign of respect than sitting. He was removed from the NFL after explicit instructions from owners. However, this season (2017-2018), almost every Sunday, at least a few members–if not a whole time in some instances–kneel during the anthem. the difference between now and a year ago, is because there is a plethora of athletes, coaches, and team owners that have knelt during the anthem. This act is a way to peacefully protest the injustices happening in America, more closely in relation to the Black Lives Matter campaign.

In addition, there have been several less seemingly peaceful protests due to the content. Charlottesville, North Carolina was home to a protests by a group of people labeled ‘White Supremacists’. The rally was in protest of the removal of a Robert E. Lee statue (which was in honor of him as a Confederate general). Despite the way the rally was portrayed, white men in the south have been labeled under a certain social status which made others back lash at the purpose of their protest. While in the park where the protest took place, there was a group of African American people who held hands and made a ring to protest what the confederacy actually stood for. Those who initiated the original protest showed up with torches and while not using violence, were verbally abusive which made the protest take a dark turn.

Overall, the U.S seems to have made major project within the last twenty years in terms of accepting those who are different from the social norms in the U.S.